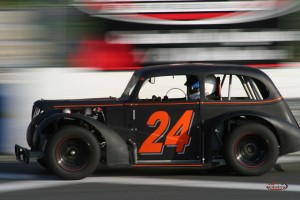 After a Season opener last weekend that was filled with action, one would think it would be hard to follow that up tonight. But as race fans know; it only gets better!!!  Tonight is the start of the 2011 Chase for the Championship at Canada’s Fastest & Toughest 1/3rd Mile Oval.

In the Battlefield Equipment 4 Fun Division, Mike Gilbert (30) set an amazing pace winning both of his heats, setting up for a run at the points lead for the Championship, but fan favourite and last year’s Chase for the Colours champion; Ember Junkin (19) had other ideas. Junkin winning her 1st heat, battled her way thru traffic at the start of the 20 Lap feature race to take a lead, leaving Gilbert to try and make up ground. In the end it was the Complete Auto Wreckers #19 in victory lane with the soft spoken Ember Junkin in the lead of the points.

The  Peterborough Hyundai Mini Stock, last week’s feature winner Tyler Junkin (41) started an impressive run on the points lead with both of his Heat wins, and lets not discount the aggressive style of Neil Hannah winning his second heat. But the night belonged to the last years points runner up; Mike Nelson in the NAPA, R&J Machine, Daryl Taylor Painting #85. A much needed win for this rising star in the Ontario racing scene.

A wreck in turn 4 putting the #29 or Rick Edgerton hard in the wall in the  Parry Springs Renegade Trucks open the door for rookie Stacey Bierworth (37).  The Bierworth racing family has been a long time sponsor of the short track truck racing series, so it is fitting that their youngest racer starts off the points race with an impressive lead.

www.peterboroughspeedway.com  Late Models saw some new faces and a return or a 20 year veteran to Peterborough Speedway. The #66 normally driven by Larry Crowe Jr, had Jeff Bell in the driver’s seat, returning to Peterborough Speedway 20 years to the day from when he first strapped on a rope for a seat belt and raced here at Peterborough Speedway, taking the 1st Heat win. The Cal Jessup Trucking #55 of Darren Kearnan won both of his heats for a great start to the Series points Chase.  The other half of the Larry Crowe Sr Racing team #77x of Howie Crowe posted his 1st win ever in a Late Model car winning his second heat. But the story of the night was the return of Tim “Fast” Fernandez (77). Last week he found how hard the wall really was in turn 1, as he broke a ball joint on the front straightaway, posting a DNF. But tonight was his night as he held off a pack of some of the fastest late model cars in short track racing, winning his first Late Model feature race at Peterborough Speedway.

The Lucas Oil Legends  is always an exciting series, and tonight did not disappoint. Talking with #24 Andy Warbutton before the race, he was concerned that the setup of his car was strong at the start, but would go away on the long runs, especially in a feature race of 25 Laps. Winning his 1st heat and coming in 3rd in the second heat, no one could really count him out.  Tim “Fast” Fernandez was not only a factor in his Late Model, winning both of his heats in his Legend car meant he could be a factor in the feature. And lest we forget last week’s Season Opener winner and reigning 2 time series Champion; Adam Cuthberson (79). As the Feature race began, we knew something had to give, but we never expected the brand new car of Cuthberson (79) to be caught up in the “big one” in turn 4, ending his night early, but also collecting Fernandez (77). The Race ended up being a drag race thru 3 more cautions between Bill Mason (4) and the 24 of Andy Warbutton. It was Warbutton that got the last hole shot on the restart, holding off Mason to take a well deserved victory. Warbutton says he likes this setup now…. I wonder why?