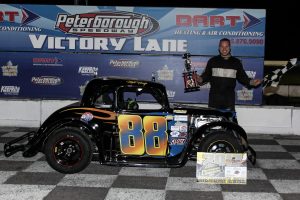 Racers at any level will always look back at the moments that highlighted their careers. In 2016, Matt Haufe won the prestigious Autumn Colours Classic and captured the Legends Series championship. Saturday, May 20th he added another defining moment to his resume, by capturing the first ever main event run under the Trailers Plus Eastern Ontario Legends Series banner.

Close to 25 teams signed-in to tackle the tight, tricky bullring on Mount Pleasant Road, west of the Liftlock City; on a night that also marked the start of the track’s 50th Anniversary Season. Even though he started on the front row – alongside Cole McFadden – the win was hardly a walk in the park for the driver of the #88 machine. The leaders had caught the tail-end of the field with just 4 laps on the scoreboard and had to work the outside line through traffic.

Yellow flags on the 7th and 18th laps slowed the pace and put some hard chargers directly on the leader’s back bumper. A late race caution – for a multi-car wreck in the 3rd turn – gave the rest of the field their last chance to steal the win, but Haufe was up to the challenge and earned his first win of the year. Cole Ledson, Cole McFadden, Adam Cuthbertson and Jamie Riberdy were next across the stripe. Jeff Drimmie, Don Arnott, Shawn Murray, Terry McClelland and Rick Eades rounded-out the top 10 finishers.

Earlier in the event, qualifying heats were won by Cole McFadden, Haufe and Cole Ledson, with a pair.