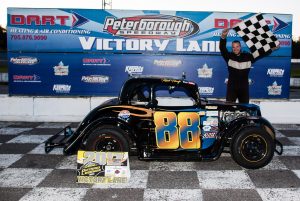 Check any dictionary for a definition of the word ‘domination’ and chances are good that you’ll also see a photo of Matt Haufe along with the description. Saturday, June 24th – at Peterborough Speedway – the driver with Trailers Plus Eastern Ontario Legends Series claimed his 5th straight main event win of the year.

Coming from a starting spot outside the 3rd row, the graduate of the karting ranks set his sights on the front of the field, but his trek was far from a simple journey.

As early as the pre-race practice sessions, Dave Riopelle had shown that he had one of the strongest cars in the pit area and the series veteran was confident that he had the piece to beat. As the field lined-up for the initial green flag, the florescent orange and black machine sat on the outside of the front row, next to Cole Ledson who had also shown some strength during warm-ups.

Ledson grabbed an early lead, but as the lap counter clicked-off 3 complete, Riopelle took control. Haufe slipped into 3rd spot after the races first yellow flag and was running second when the paced was slowed again for a caution flag in turn 2, with 11 laps down. Riopelle kept showing the quick way around, but the #88 machine was never far from his back bumper.