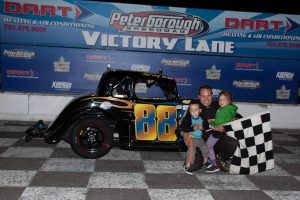 At the start of a new year, every driver holds the same high hopes for a successful season. Matt Haufe is no different, but the former go-karter has enjoyed an unbelievable 2017 tour with the Trailers Plus Eastern Ontario Legends Series. Saturday, July 8th Peterborough Speedway hosted its first ever National Qualifier, with a trio guaranteed starting spots on the line for the U.S. Legends Asphalt Nationals – October 13th and 14th – at the Las Vegas Motor Speedway Bullring.

Teams came to the green flag 22 strong, with a special event heads-up starting procedure placing Haufe and Adam Cuthbertson on the front row for the 30-lap ‘A’ main. Cuthbertson took the lead front the outside line on the initial start, but surrendered the top spot to Haufe a lap later. The race’s first yellow flag – with 6 laps on the scoreboard – slowed the pace, with Cole McFadden moving into second spot on the restart.

Brad Haufe took a hard tumble in turn 2, as the field came back up to speed following another caution. The driver was okay, but the #17 ride was unable to continue. Matt Haufe built-up a 6-car length lead, as the pack started to work through lapped traffic just past the halfway mark. Not even a pair of late race yellows could deny his 6th straight win. Robin Jongen, Cole McFadden, Kevin Foisy and Cuthbertson completed the top 5.