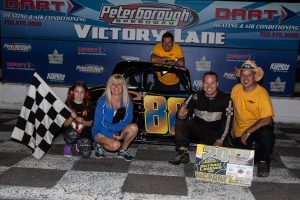 His season-long win streak may have ended a week ago, but that only made Matt Haufe more determined to start a new run of dominating performances with the Trailers Plus Eastern Ontario Legends Series.

The popular tour returned to action – Saturday, July 29th – to close out the month at Canada’s Toughest 3rd of a Mile Paved Oval. Jamie Riberdy and Adam Cuthbertson led the field to the green flag and like the other 17 starters, they were after the extra pot of gold at the end of the rainbow. Series officials had posted a bonus buck payout to the winner if the 25-lap feature went caution-free and every driver in the starting line-up had their sights set on collecting the cash.

Riberdy and his teammate Cole Ledson took turns at the front of the pack, swapping the lead back and forth during the early stages of the event. Matt Haufe – who except for Kevin Foisy’s July 22nd win at Sunset Speedway, had been the only feature winner this season – took the runner-up position with about a handful of laps on the scoreboard. The pack closed ranks and was working through the backmarkers with 11 laps complete, before the race’s only caution flag waved for a spin in the 4th turn a couple of laps later.

On the restart, Haufe ran in Ledson’s tire tracks for a few laps and the pair actually touched – without incident – on the front stretch, before the driver of the #88 machine took the lead on lap 17. From there, it was hammer-down and full speed ahead for Haufe, whose checkered flag was his 10th in 11 starts, dating back to the 2016 Autumn Colours Classic. Ledson, Cole McFadden, Riberdy and Adam Cuthbertson followed Haufe across the line. Wes Cuthbertson, Dave Riopelle, Parker Traves, Andre Fiorini, Jeff Drimmie, Mark Griffin, Bill Mason, Rick Eades, Andrew McFadden, Don Arnott, Andrew Massey, Dawson Drimmie, Cory Richardson and Jeff Forsey completed the finishing order.