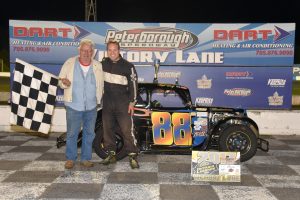 Canada’s Toughest 3rd of a Mile Paved Oval has been very good to Matt Haufe. Since the 2016 running of the Autumn Colours Classic, no other Legends car racer had won a main event at the popular Central Ontario raceway. After his performance Saturday, August 26th at Peterborough Speedway, that streak remains intact. In fact, other than victories by Kevin Foisy and Robin Jongen Saturday, July 22nd and August 5th – at Sunset Speedway – the Stittsville, Ontario speedster has been the only winner on this year’s inaugural Trailers Plus Eastern Ontario Legends Series schedule.

The 25-lap feature event came to the green flag with former Legends champion and Peterborough Speedway Late Model regular Adam Cuthbertson and Jamie Riberdy on the front row. Cuthbertson led through the early stages, with Haufe – who had started outside the 3rd row – taking 3rd with only a pair of laps on the scoreboard. He set his sights on stealing the runner-up spot from Riberdy with 7 complete and had the lead just a couple of laps later.

Riberdy held onto second, as the #88 machine took control of the show. The leader closed on the tail-end of the field and started lapping slower traffic less than a handful of laps from halfway and built-up a 4 or 5 car length advantage on the #6J while working through traffic. An incident in the second turn with 20 laps complete slowed the pace and created a 5-lap trophy dash.

Trailers Plus Eastern Ontario Legends Series notes: Adam Cuthbertson had a pair of heat race wins, with Haufe and Riberdy taking the others…Next on the schedule will be the year’s only appearance at Grand Bend Speedway, Saturday September 9th. The tour returns to Peterborough Speedway October 6th, 7th and 8th as part of the 25th Annual Autumn Colours Classic.