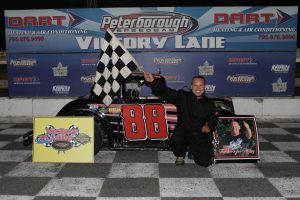 Coming to the line 26 starters strong for their second Peterborough Speedway start of the 2018 season, the Trailers Plus Ontario Legends Series was back in Central Ontario Saturday, June 16th.

Paul Pierik and western region invader Brandon Thurlby brought the pack from the staging area for the 25 lap headline dance on the venue known as Canada’s Toughest 3rd of a Mile Paved Oval. As quickly as the initial green flag waved, the paced was slowed for a multi-car incident on the back stretch that reduced the ranks by about a handful of runners.

Pierik took the lead on the second attempt at the start, but his time at the front of the pack was short-lived as a mechanical issue sent the #33 machine to the pits with about a handful of laps on the scoreboard. Teams battled high and low looking for an advantage after Wes Cuthbertson inherited the top spot, with Cole McFadden rolling into the runner-up position.

Just short of the halfway mark, reigning series champion and national title holder Matt Haufe had moved from his 9th place starting spot and into the lead. The pilot of the #88 was holding a pretty wheel as the field started to catch the tail-end of the field with 15 laps on the scoreboard. A late race yellow flag for an incident in the 3rd turn with 8 laps remaining bunched the running order, but despite the efforts of a hard charging Kevin Foisy, Haufe scored the win. Cole McFadden, Adam and Wesley Cuthbertson completed the top 5 spots.

Trailers Plus Ontario Legends Series notebook: The Ontario Legends Series qualifying heats were shared between Andre Fiorini, Matt Haufe, Terry McClelland, Adam Cuthbertson, Cole McFadden and Paul Pierik…It looked for a while like the series would be forced to run the first last-chance qualifier in its history and even though several teams were forces to unload their cars and gear outside the main pit area, 26 of the teams that had signed-in answered the call for the main event.