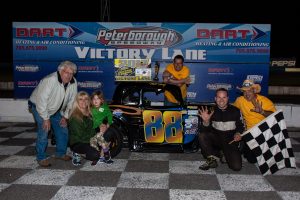 Throughout its inaugural season, the Trailers Plus Eastern Ontario Legends Series is making motorsports history. The popular tour is drawing solid car counts and building a high level of fan support at every stop on the schedule. Saturday, June 3rd the group made its second start of the year as part of the 50th Anniversary Season at Peterborough Speedway.

22 teams logged-in to do battle at the venue known as Canada’s Toughest 3rd of a Mile Paved Oval, with Cole Ledson and Dave Riopelle leading the pack to the green flag for the 25-lap main event. Before the first lap was scored a yellow flag was displayed and necessitated a complete restart. As series and track officials compared notes for a replay of the initial start, Ledson headed pit-side and would return to track at the tail-end of the field.

Coming from outside of the 3rd row, Matt Haufe had moved into 2nd spot as the lap counter clicked-off 4 complete, but a series of yellow flags with 9, 11, 12 and 14 circuits on the scoreboard slowed his charge to the front. The #88 machine would follow an impressive run by Cole McFadden for about half a dozen laps, before he worked his way into the lead with 18 laps in the record books. From there, the leader worked his way around lapped traffic and held McFadden at bay to take the checkered flag. Ledson, Riopelle and Jamie Riberdy completed the top 5. Mark Griffin, Wes Cuthbertson, Terry McClelland, Bill Mason, Andrew McFadden, Shawn Murray, Brad Haufe, Paul Pierik, Jeff Drimmie, Joe Sherman, Robin Jongen, Dawson Drimmie, Cory Richardson, Rick Eades, Adam Cuthbertson, Don Arnott and Glenn Lloyd rounded-out the finishing order.