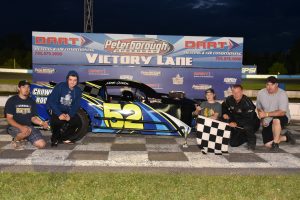 It was bound to happen eventually. After seeing first time career triumphs in its first 5 events of the 2017 schedule, the Ontario Modifieds Racing Series – powered by Torque Builders Inc. – has had a repeat winner, as Mark Gordon claimed the checkered flag – Saturday, July 15th – at Peterborough Speedway.

Mark Gordon and Randy Hollingsworth brought the field of 13 starters to the green flag and from the moment his right foot stood on the accelerator, Gordon took control of the 25-lap main event. His lead was as much as 7 car lengths, as the rest of the pack battled for positions in the running order behind him.

Brad Stevenson and reigning OMRS point champion John Baker Jr. – who had each started near the middle of the starting line-up – found their way closer to the leader as the laps clicked-off. Stevenson, who won his first career ‘A’ main with popular open-wheeled tour earlier in the year made it to the runner-up spot, while J.B.J. had climbed to 4th as the scoreboard hit double digits. The lead duo had about a straightaway lead over Baker – who had now moved into 3rd – as they began closing on the backmarkers.

Gordon and Stevenson were rolling through the 2nd turn, with 21 laps complete, when the pair made contact and both cars spun. Under the yellow flag, Stevenson accepted responsibility for the incident, using the track’s gentleman’s rule. That meant the driver of the #77 machine would restart at the back of the pack, with Gordon hot his spot back.