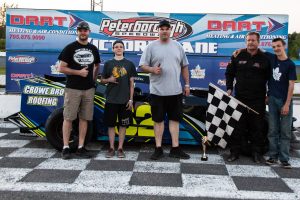 A dozen starters rolled to the starting line for the 25-lap feature tilt that kicked-off the night’s main events. Mark Gordon and Willow Barberstock paced the field to green flag. Shortly after things got rolling, the pace was slowed by a caution in the second turn. Scorers quickly checked the line-up and the pack got ready for the restart.

Gordon jumped-out to an early lead, but Brad Stevenson and John Baker Jr. – who had come from the 8th and 12th place starting spots respectively – charging toward the front of the running order. Baker’s effort had been plagued by mechanical issues during the tour’s first events, but he worked the outside line to gain a number of spots. Another yellow flag – with 17 laps on the board – slowed the march again and put Stevenson on Gordon’s back bumper for a late race charge.

Stevenson had a pair of checkered flags from qualifying action earlier in the day. Gordon and Baker Jr. took the other preliminary rounds.