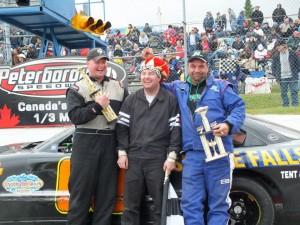 After 2 days of practice and qualifying, Sunday afternoon welcomed the main events at the 20th Annual Autumn Colours Classic – presented by Lucas Oil Products – at Peterborough Speedway.  7 different divisions battled for the honour and prestige that comes with being a 2012 champion at the largest race event in the province.

The Limited Late Models got things rolling just after 12:30, as Tom Walters and Andy Kamrath paced the field of 26 starters to Dave Sikma’s green flag for 75 action-packed laps on Canada’s Toughest 1/3rd mile oval.  It didn’t take long for Kamrath to execute the first task on his ‘things to do list’ as he dropped to the bottom of the track and took the lead from Walters, just as the green flag waived.

Al Inglis took his #69 to pit road with just over 5 laps complete and before there were 10 circuits in the book, Kamrath caught the tail of the field and put Exeter, Ontario’s Alvin McNicol a lap down.  Peterborough Speedway regular Tyler Liscum was running in a tight pack when his #14 got loose coming off the 4th turn and spun on the front stretch to bring out the day’s first yellow flag with 23 laps complete.  Kamrath, Walters, Scott McTeer, Jason Parker and Gord Shepherd made-up the top 5 as the field came back to speed.

A second yellow with 28 down scattered the pack coming off turn 4.  Billy Zardo and Todd Delisle were the first 2 cars to go around, withPeterborough’s Steve Foster taking to the infield to escape the melee.  Stompin’ Tom Walters, who had been knocked out of the preferred bottom groove, took his #47 Mustang to the pits to have the crew diagnose a handling issue.

Just as the field came back to green, the 37 of Marvin Freiburger spun the tires and caused the rest of the pack to look for racing room. Delisle, Walters, Tommy Robb and John Baker Jr. managed to get stopped before there was any serious contact and the field got going again, still with Kamrath in the top spot.

With 43 laps in the books, the #24 of Nick Goetz got into the back bumper of Chris Mitchell and sent the defending Autumn Colours Classic champion spinning off the second turn.  Andy Kamrath, Scott McTeer, Jason Parker, Dwayne Baker and Gord Shepherd were the top 5 runners as the green flag came back out.  Tyler Liscum’s tough day continued with a solo spin entering the 3rd turn, as the lap counter clicked-off 52 complete.

Just as Jason Parker was looking to the inside of race leader Kamrath to take over the top spot, the #89 of Tommy Robb collected Liscum on the front stretch with 58 laps down.  It was the first time Kamrath had been challenged for the position since the drop of the initial green flag and likely made him aware of his surroundings as the green flag came back out.

On lap 68, an incident in turn 3 brought out the red flag as Jason Parker got into Gord Shepherd and also collected Tom Walters, who was running 4th after a rough start.  Track medical staff was called to the #47 machine of Walters, who was complaining of wrist pain after the impact.  With the field stopped on the front stretch, the top 5 was Kamrath, McTeer, Baker, Shawn Cronan and Peterborough Speedway regular Kelly Balson.

With less than 10 laps on the table, the Limited Late Model feature became a trophy dash and 2 laps after the red flag was lifted, Dwayne Baker muscled his way around Kamrath and held on for the win.  Scott McTeer was second at the checkered flag, with Kamrath, Shawn Cronan and Rick Walt completing the top 5.

A 50 lap Thunder Car feature was the next order of business, with the 30 starters led to the line by Herb Walters and Shawn Chenoweth.  It only took 5 laps for the event’s first yellow flag to appear when the #69 of Craig Scott got into the rear of Kenny McNicol as the field entered the 3rd turn.  The incident also caused front end damage to the #34 of Cayden Lapcevich as the 12 year-old son of NASCAR Canadian Tire Series driver Jeff Lapcevich had no where to go.

With 13 laps complete, pole sitter Herb Walters’ #88 ride started to fight a push and was forced to the outside line and surrendered the lead to Joe Adams, who had come from the 5th place starting spot.  2 laps later, the day’s second yellow flag slowed the pace as Vaughan Lawrence was hit from behind by Andrew Swindells as the field ran through the first and second turns.  When the green flag came back out, the top 5 was Adams, Chenoweth, Randy Rusnell, Lane Zardo and Dave Doucette.

With 18 laps complete, 5 cars came together in the middle of turns 3 and 4.  Craig Scott tapped the back bumper of Dan Price’s #09, leaving Vaughan Lawrence, Donny Beatty and Dennis Cybalski with the high groove of the track blocked.  While the field circled the track under yellow, Howie Crowe’s #28 was rolled to the pits and the #63 of 2012CanadianTireMotorsportParkchampion John Baker Jr. stopped at the entrance to pit lane.  Herb Walters also pitted for some attention from the crew.

After a red flag on lap 23 for a multi car incident in turn 3 that included some damage to the retaining wall and a little WWE action, racing got back underway until the 31st circuit, when the #10x of Dennis Cybalski slowed to a stop on the back stretch.  With the race under time constraints, officials began counting yellow flag laps toward the race total after the lap 35 restart.  Joe Adams was still in control of the field, but the yellow flag was back out with 38 complete for a spin in the first turn.

Following another crash in the 2nd turn, officials made the call for a green, white, checkered finish.  Joe Adams held on for the win, with Matt Mulholland, Dave Doucette, Paul Maltese and Shawn Arnott completing the fast 5.

After a Thunder Car feature that far exceeded its allowed time window, the OSCAAR Modifieds ran a relatively tame affair.  Gary McLean and Justin DiMelo brought the field to the green, but it wasMcLean’s race.  The driver of the #8 machine led every lap for the win.

The Mini Stock field had defending race champion Daryl Fice and Casey Cavanaugh on the front row for their 50 lap feature event.  Yellow was on the race track with 10 laps in the books, as the #8 of Oshawa’s Ryan Babin slowed in the 3rd turn.  Fice, Cavanaugh, Neil Hannah, Chris MacDonald and Kevin Strutt – who started 23rd – made up the top 5 on the restart.

Another yellow flag, with 15 laps complete scattered racecars and debris on the backstretch as Babin, Ken Townsend and Dave Watchorn were involved.  Casey Cavanaugh led the field back to the green flag, but quickly gave the top spot back to Fice as action resumed.  There were 18 laps finished when the next caution flew for a turn 2 wreck with Trevor Hemingway, Watchorn, Bob Tolton and Tim Tolton.

Even though they’re one of the smallest divisions to run during the Autumn Colours Classic, the Mini Stocks traditionally put on one of the biggest shows of the weekend and the 2012 edition was no exception.  Even though he was racing with a heavy heart knowing his good friend and unofficial team mate Alex Lees was missing from the starting grid after suffering a concussion during Saturday night’s qualifying, Oshawa’s Daryl Fice managed to hold off a late race challenge from Ottawa’s Chris MacDonald to pick-up the win and celebrate a second consecutive Autumn Colours Classic victory.  Neil Hannah was 3rd, followed by Casey Cavanaugh and Charlie Smith.

There were 112 laps on the agenda when the Pro Late Model teams took to the track for the day’s second last feature event.  Andrew Gresel and Brandon Watson paced the field of 22 starters to the stripe.  After close to 10 green flag laps, the #27x of Mat Box and the #3 of Mark Watson – Delaware Speedway regulars – came together in the 2nd turn.  Each driver was able to restart under their own power, but from the rear of the field.

Less than a lap after the restart, the yellow flag was back out for a hard turn 3 wreck when Mike Wallace got into Kent Nuhn and collected Jason Shaw, who made hard contact with the retaining wall.  The 2012 Flamboro Speedway track champion was a favourite to take the win, but was towed from the scene and done for the day. Norwood,Ontario’s Ryan Kimball was also involved and made it back to the field just as the green flag waived again.

Coming back to the green after a lap 23 caution, Andrew Gresel and Bryan Mercer were pacing the pack in the #81 and #81x respectively. Just as the flag came out, the Gresel machine seemed to ‘buzz’ the tires and jumped-up the racetrack.  Everyone made it through, but the field bottled-up behind the Sauble Speedway regular.  Brandon Watson grabbed the top spot, but Mercer was given the position after officials checked scoring.

With 38 laps on the scoreboard, officials made the decision to begin counting caution flag laps due to the time constraints.  Shortly after that call, the #10 of Gord Shepherd made contact with the rear bumper of Matt Pritiko’s #21 machine as the field was working through the 3rd turn.  The collision also collected the #49 of Casey Cavanaugh.  All 3 were able to continue, albeit at the tail of the field.

With 44 complete, Gary Elliott’s day came to an end as the #36 Chevrolet Impala was bounced off the front stretch after contact with Mark Watson.  On the restart, the top 5 runners were Mike Bentley, Bryan Mercer, Brandon Watson, Brad Corcoran and Ryan Kimball.

A quick yellow flag flew on lap 88 when the #9 of Brandon Watson bumped Gord Shepherd.  Shepherd spun down the track, then moved up and made contact with Watson.  Watson lost a number of laps in the getting new tires on his car.  After losing several positions on the track, Bryan Mercer spun the #81x in the second turn with 95 laps complete.  The Port Hope,Ontarioracer rolled to a stop on the high side of the speedway and was pushed to his pit stall.  When the race was restarted with 103 laps complete, the top 5 was Mike Bentley, Matt Pritiko, Brad Corcoran, Mike Wallace and Mark Watson.

The 20th Annual Autumn Colours Classic – presented by Lucas Oil Products – concluded with a 40 lap main event for the 4 Fun division. Bowmanville’s Chris Mulders and Ryan Oosterholt of Blackstock brought the 18 starters to the stripe.  It was 10 green flag racing laps before Tiffany Vandebelt ofNewtonville,Ontario produced the first yellow.  She was able to stay with the pack, but restarted at the tail of the field.

After the initial yellow flag, everyone seemed to settle into a rhythm and things fell nicely into place with Peterborough’s Neil Hannah grabbing the win over Mulders and James Townsend of Sunderland. Oosterholt was 4th, with Bowmanville’s Griffin Powell claiming the 5th spot.