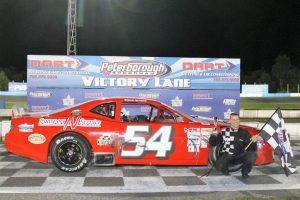 From the opening lap – with Steve Arrand and Tim Tolton on the front row – the 100 lap Lucas Oil Sportsman Cup main event had a green flag feel. Arrand took the lead early, with Stu Robinson Jr. hot on his tail. The field caught slower cars with 7 laps on the board, with the lead duo joined by Kevin Gallant. Turn-by-turn, the laps clicked away giving fans a great show to watch and keeping officials who tracked the race’s running order on their toes. Only Arrand, Robinson Jr. and Gallant remained on the lead lap when the night’s first caution flew with 73 complete for an incident in the 4th turn. A number of other yellow flags followed, but not even a green, white, checkered flag finish could keep Steve Arrand from his first win of the year. Chad McGlynn, Tim Tolton, Stu Robinson Jr. and Doug Cathcart rounded-out the top 5. Kevin Gallant, Brent Wheller, Kevin Trevellin, Mike Hryniuk Jr., Thomas Mather, Brandon Huras, Bob Merrifield, Adam Martin and Bob Schultheiss completed the unofficial finishing order. 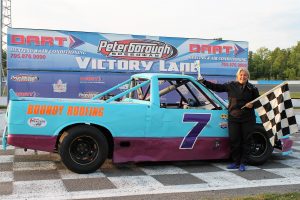 wife team of Jeff Dolley and Terri-Anne Whittern on the front row. Whittern grabbed an early lead from her spouse using the outside line and never looked back on the way her first career feature win. Bill O’Hara, Dolley. Ryan Oosterholt and Stephen Bierworth rounded-out the top 5. 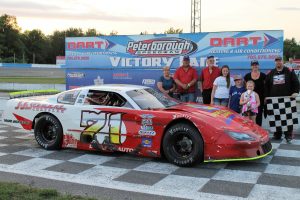 The hometown Late Models were next, as Mike Wallace and Chris Mitchell brought the 16 car starting field to the Great Canadian RV green flag. An early red flag – for a multi-car wreck in the first turn – brought proceedings to a halt, with Mitchell taking the lead on the restart and moving out to about a 6 car length advantage. The leaders caught the back of the pack and started putting slower traffic a lap down near the halfway mark, as a 4 car battle waged for 2nd spot. A lap 23 yellow for a front stretch incident, followed by another – 3 laps later – on the opposite side of the track regrouped the field and helped pave the way for Dan McHattie to score another win. Derek Lynch was 2nd, followed by Mark Gordon, Steve Powell and Amanda Balson.

With 50 laps of action on the table, Dave Feeney and Alex McGibbon led the way as the Battlefield Equipment Rental Bone Stock division left the 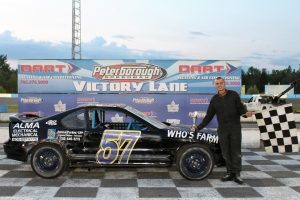 staging area. Feeney had an early advantage, with Malcolm ‘Pops’ MacDonald moving into 2nd. The race’s first yellow flag flew on lap 5 for a first turn issue, with MacDonald continuing his strong run on the restart, but Ryan Oosterholt took the lead on the 12th lap. Oosterholt and Cory Strawn broke away from the field, with 3 cars fighting for next positions in the running order. Another yellow – this time for a front stretch incident – slowed the pace again but couldn’t keep Ryan Oosterholt from victory lane. Jeremy Kelly, Chris Tubman, Mark Griffen and Sean Kennedy completed the top 5. 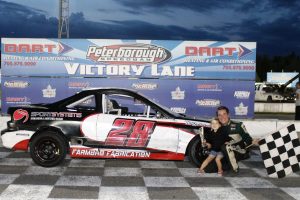 Kevin Strutt and Jassen Whyte were on the front row as the Jiffy Lube Mini Stock squad hit the track for their 20 lap feature. Strutt took the lead early and moved out to about a 5 car length advantage, with Nolan Gould taking the 2nd spot with 9 laps on the board. The lead duo started to work through the backmarkers as the lap counter showed 11 complete and Gould took the lead a lap later. Gould – from Almonte, near Ottawa – kept Strutt at bay in the caution-free feature. Ryan Oosterholt, Josh Bullen and Ember Junkin followed the leaders across the line.

All main event finishes are unofficial and subject to scoring review, as well as post race safety and technical inspection.

Bullring bullet points: Tamara Williams of Roseneath, Ontario won the night’s 50/50 draw, taking home $480…The #10 Late Model of former track champion Dave Morgan was back at the track for the first time in over a year, with Jack Morgan running his first laps in the headline division. Former track champion Ryan Babin filled-in behind the wheel of Kent Missons’ #10K Mini Stock…Larry Crowe Jr. took another King of the Hill victory, with a lap of 16.582 seconds.