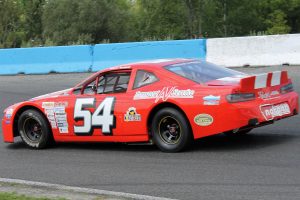 Its hard to think of the Sportsman Cup Series without including some well-known Peterborough Speedway names. Kelly Balson – who won last year’s OSCAAR Modified feature at the Autumn Colours Classic – was a tour regular in 2010 and 2011. His wife Amanda was the track’s Late Model champion in 2009 and was named Sportsman Cup rookie of the year in 2012. Former Mini Stock regular Brandt Graham won the LOSC championship in 2016 and 2017. Graham also holds the series’ Peterborough Speedway qualifying record with a lap of 14.500, set in August of 2017.

Like other weekly tracks and travelling series, the Lucas Oil Sportsman Cup Series calendar has been affected by the weather. This will be the 4th of 5 originally scheduled dates, after the season opener – Saturday, June 1st at Delaware Speedway – was cancelled by rain. Former Ontario Modifieds Racing Series regular and part-time Ontario Legends Series runner Connor James is the current point leader and won the Saturday, June 22nd event at Sunset Speedway. So far this year, a total of 24 different drivers – including former NASCAR chauffeurs Ken Schrader, Kenny Wallace and Norm Benning – have scored points in LOSC shows.

For the Saturday, August 10th event at the tight, tricky bullring on Mount Pleasant Road, pit gates will open at 1:30, with general admission grandstands unlocked at 4:00 and the night’s first green flag at 5:00.

Stay on top of everything going on during the stretch run to the 2019 Championship Clash at Canada’s Toughest 3rd of a Mile Paved Oval. Head to www.peterboroughspeedway.com or visit the track’s social media platforms on Facebook and Twitter. There is also a free Smartphone app available to give you the latest news and schedule updates 24/7/365.