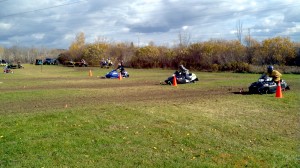 Peterborough Speedway held radar runs & grass drags sponsored by Lucas Oil. The afternoon started off with Lucas Oil sponsorship giveaways to everyone who entered the competition, with prizes for the end of the radar runs for top speeds in each class. The first event was just time trials to get the feel of the grass, which then led into the radar runs. The radar runs was a single event time trial to see who could pull off the fastest time in their own division.  The final event was friendly completion of grass drags between everyone.