A fresh, fall day dawned – Sunday, October 9th – with nothing but the final events of the 29th edition of the Lucas Oil Autumn Colours Classic on the agenda at Canada’s Toughest 3rd Mile Oval as a strong crown packed the stands at Peterborough Speedway.

With Chris Milwain and Luke Gignac on the front row, the OSCAAR Modifieds rolled to the line for a 50-lap feature to get the final day of action underway. Milwain led through the event’s early stages, with the No. 14 of AJ Emms and Andy Kamrath, in the No. 35 ride marching toward to the front of the field. Emms was running 2nd, with Kamrath 3rd at the halfway mark. As the leaders started to work through slower traffic, Kamrath moved into the lead and had a straightaway advantage with 39 laps complete. Not even a late-race caution – with less than a handful of laps remaining – would keep Kamrath from the win and the 2022 OSCAAR Modified title. Emms, Colton Everingham, TJ Edwards and Dale Reinhart completed the top 5. 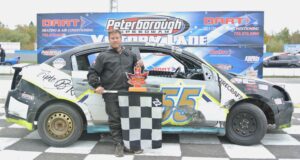 tilt. Givens took the early lead but surrendered the spot to Rockwood with 7 circuits on the scoreboard. A yellow flag a lap later brought the field back together, with Kyle Neumeister taking the lead on the restart. David Booth took over the top spot at the halfway mark and survived a pair of late race caution flags for the checkered flag. Craig Cole, Steve Finnegan, Eric Stewart and Spencer Riddell were next across the line.

Note: David Booth, No. 26 was the first car across the line but was disqualified for technical violation discovered in post-race inspection. Craig Cole, No. 55 was credited with the win.

Front row starters JR Fitzpatrick and multi-time track champion Dan McHattie showed the way as the Electric City 167 Late Model shootout took centre stage. A quick yellow flag slowed the pace early but for the most part, the longest race distance many of the 19 racers in the starting field will ever run was a steady affair. Fitzpatrick’s No. 84 machine built-up a strong advantage and had started working through the tail-end of the field with 14 laps complete. Gord Shepherd moved into the runner-up position and set his sights on Fitzpatrick. A few more yellow flags before the competition caution brough the pack back together but there was no match for JR Fitzpatrick, who led every lap on his way to the win. Shepherd held on for the 2nd place finish. 2021 event winner Ryan Kimball was 3rd, with Travis Hallyburton and Connor James completing the top 5.

Dawson Drimmie and Jordan Latimer had the front row starting spots for the weekend’s second 30-lap Trailers Plus Canadian Legend Car Series feature run. Off the 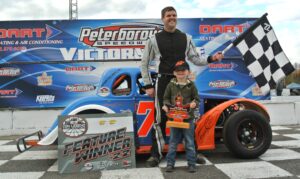 initial green flag, Drimmie and inside 2nd row starter Hudson Nagy ran side-by-side for the opening lap, before Nagy took the lead. A yellow flag with 5 laps complete slowed the pace and saw Drimmie take the lead on the restart, before Cole McFadden took over the position. The leaders started working through the tail-end of the field just past the halfway mark, with Adam Cuthbertson taking the lead. The driver No. 79 machine held on for the win, with McFadden, Drimmie, Nick Portt and Jordan Latimer completing the top 5. 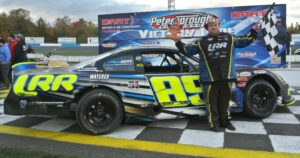 Todd Davenport and Lane Zardo brought the 15 car KOD Disposal Super Stock 50-lap ‘A’ main to the line. Zardo picked-up the early lead, with the crowd watching strong runs by Rick Spencer-Walt and Shawn Chenoweth. Following the race’s first caution flag, Chenoweth took the lead away from Zardo, with slower traffic becoming an issue with just less than 20 laps remaining. Zardo snatched the top spot back following a lap 38 yellow flag, but a short time later, mechanical issues forced the No. 36 machine behind the wall. Chenoweth and Spencer-Walt swapped the lead back and forth several times before running out of enough laps for another change. Shawn Chenoweth earned the traditional crown that goes to the Autumn Colours’ Super Stock feature winner, with Spencer-Walt, Davenport, Paul Pepper and Brian Wilson completing the top 5.

With 67 laps on the table – in memory of Melissa Bullen – the Jiffy Lube Mini Stock field came to the stripe with Josh Bullen and Chandler Bos on the front row. 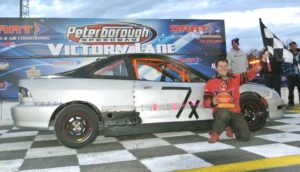 Following an early yellow flag for an issue in the 3rd turn, James Townsend took control of the field with Josh Bullen, Johnny Paradzinski, Shawn Taylor and Bobby Mercer hot on his tail. With 28 starters taking the initial green flag, attrition was a major factor on the day as several top runners fell out of the field. Townsend survived a late race caution flag and held-off a hard charging Nolan Gould to take the win. Paradzinski was 3rd, with Taylor and Mercer completing the top 5. 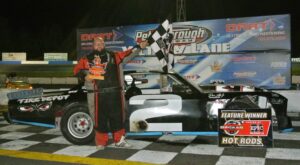 The final main event of the 29th Lucas Oil Autumn Colours Classic was a 40-lap headliner for the OSCAAR Hot Rod teams. As Tyler Hawn and Tom Walters attempted to bring the field to the Great Canadian RV green flag, an impromptu rain shower delayed the start of the event but fans were still treated to an entertaining end to the weekend. Hawn took the early lead, with Stompin’ Tom and Bill Zardo Sr. – a pair of Canadian motorsports legends – making headlines. Just as the leaders were working through the tail of the field, the race’s only yellow flag flew. Not even that slowdown could keep Tyler Hawn from victory lane, with Zardo, Walters, Steve Book and JR Fitzpatrick next across the line. The 4th place finish clinched the 2022 OSCAAR Hot Rod title for the No. 47 of Book.

Bullring bullet points: Crystal Woodland of Orangeville, Ontario had her own big with, collecting more than $2629.00 in the day’s 50/50 draw…On behalf of track management and officials the Peterborough Speedway promotional team would like to thank the staff, competitors and fans who helped make the 29th edition of the Lucas Oil Autumn Colours Classic a resounding success.

With the final checkered flag of Autumn Colours, the 2022 stock racing schedule at Peterborough Speedway is complete. The track will host a program of Snowmobile and ATV Radar Runs and Grass Drags, starting at 12:30 Sunday, October 16th.