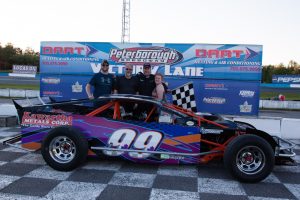 At each event on this year’s Ontario Modifieds Racing Series – powered by Torque Builders Inc. – schedule, fans of the popular open wheeled tour are checking the starting line-up for drivers who have yet to win a main event. In every show so far – beginning with Duane Cinnamon, Brad Stevenson and Mark Gordon – feature race winners have earned their first career checked flag. That trend continued Saturday, June 24th as Colborne, Ontario’s Linc Brown claimed the win.

Starting inside the front row, the former provincial late model runner had a pair of former champions in John Baker Jr. and Robert Warnes on his tail for the 25-lap feature tilt. From the drop of the green flag, the #99 machine jumped-out to an early lead as the rest of the pack jockeyed for position behind him.

Baker and Warnes brushed together briefly on the exit of the 4th turn and although the casual contact slowed each driver, they were able to keep their rides under control. It wasn’t until a yellow flag for a turn 2 jingle with just over a dozen laps complete that drivers got a chance to relax. The pause might’ve been nice, but it also brought Baker and Warnes back in touch with the leader for the restart.

Back at speed, Brown used the inside line to once again take control of the field, but Baker – who dominated the series on the way to his 2016 championship – was looking for his first win of the year. He closed on the front-runner and managed to get alongside on a couple of occasions, but couldn’t complete the pass.