Mark Gordon and Willow Barberstock paced the Ontario Modifieds Racing Series to the line for the first feature event of the night. The yellow flag flew just as the field was entering the first turn on the initial start, with the line-up needing to be re-racked for another try. Gordon would gain an early advantage, but had Brad Stevenson and John Baker Jr. – who had both come from deep in the field – looking to take a turn at the front. Another caution with 17 laps on the board slowed the pace, but didn’t delay the outcome. Gordon took the win over Stevenson, with JBJ 3rd. Chris Burrows and Duane Cinnamon completed the top 5.

With Malcolm ‘Pops’ MacDonald and Brandon Feeney leading the way, the Battlefield Equipment Rental 4Fun teams rolled from the staging area for 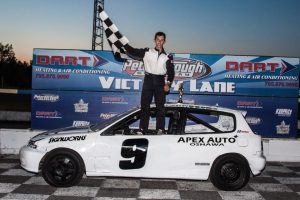 their main event. There were many 3-wide battles throughout the pack, as the leaders encountered lapped traffic with only 6 laps complete. Sean Kennedy – who entered the night trailing defending track champion Jeremy Kelly by only 4 points – moved into second spot, just before a hard crash by Michael Howe brought proceedings to a halt. Kennedy took the lead on the restart and held-on for his second win of the year over Andrew Massey, Jeremy Kelly, Jake Kelly and Brandon Feeney. 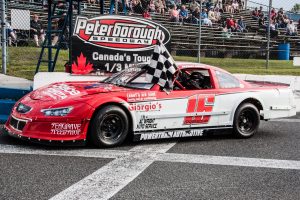 Former track champion Anthony DiBello and Bailey Jacobs paced the Thunder Car field to the Great Canadian RV green flag for a 20-lap main event. The lead duo broke away to an early advantage, with Jacobs glued tightly to DiBello’s back bumper until a lap 9 yellow flag. Dan Archibald took over the runner-up spot with 11 circuits on the board, but the driver of the #07 had nothing for DiBello. Jacobs took 3rd, with James Townsend and Fedele DiBello 4th and 5th. 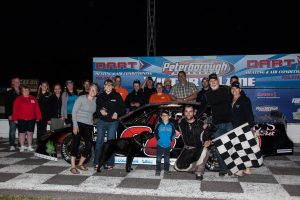 their 30-lap tilt. An early yellow flag caused a complete restart, but Betts would take control of the field. The leaders caught the tail-end of the field with 13 down as Dan McHattie – who had taken 3rd spot in the early going – mounted his charge to the front. A late race restart following a lap 27 caution allowed McHattie to take 2nd from Bryan Mercer, but the checkered flag belonged to Betts. Cousins James and Jack Horner took the 4th and 5th spots.

With Noel Snow and Kevin Strutt on the front row, the Jiffy Lube Mini Stocks wrapped-up the night running a 50th Anniversary special 50 lap feature. The 22 starters hustled their way around Canada’s Toughest 3rd of a Mile Paved Oval, as Snow and Strutt led the way. A 3-wide move through lapped traffic on lap 22 brought the fans to their feet and similar action during the entire race distance forced scorers to keep their pencils sharp. A yellow flag in the 2nd turn with 35 laps down gave everyone a breather and just a pair of laps later, Ryan Oosterholt made a pass for a lead that he’d never relinquish. Strutt and Snow were 3rd and 4th, with Erin Kearns and Neil Hannah finishing-out the fast 5. 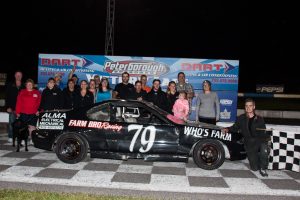 Bullring bullet points: The night’s 50/50 draw paid $543.00 to a lucky race fan…It was a night of substitute drivers in the 4Fun division. Brandon Feeney filled-in for his father in the #38, while Andrew Massey wheeled Keith Parkes #57 to a pair of heat race wins. The game of musical chairs continued in the #26 car, as Matthew Vanderbelt took a turn behind the wheel.