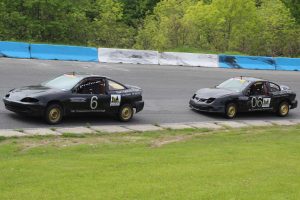 According to the calendar, the biggest race weekend of Peterborough Speedway’s 2019 schedule is still about a couple of weeks away, but that hasn’t kept Lavalle Racing from working hard to get the cars they’ll run in the 27th annual Autumn Colours Classic ready for battle. The hometown team – comprised of brothers Brad, John and Christen Lavalle – has plans to compete in the Bone Stock and Super Stock divisions during the 3-day spectacular at the tight, tricky bullring on Mount Pleasant Road.

After sharing the driving duties with the team that earned this year’s Renegade Truck division track championship, Brad Lavalle says he’s looking forward to seeing his family-owned program turn in a strong performance at the season-ending show.

“We might not have the same operating budget as some of the bigger teams, but this event has always shown that good things can happen just by being in the right place at the right time,” admitted the driver who finished 7th in this year’s Bone Stock standings. “We’ve had some excellent support from our friends and sponsors Dan’s Appliance Repair, Norwood Auto Wreckers, Savage Bear RV Park, Kingsway Auto Service, Mr. Transmission – Peterborough, Hamilton Rad and Black Flag Racing all season. If there is such a thing as having a home track advantage, I’m sure we’ll be able to show the invaders a thing or 2.”

Every trip the 3 Lavalle brothers make to the racetrack is like a family reunion, as the passion they have for the sport began with their father Mark who raced on and off in several different divisions including Bone Stock, Mini Stock and Street Stock machines for close to 3 decades. Mark Lavalle still spends every Saturday night at Peterborough Speedway, as a member of the clean-up crew.

When things get rolling at the popular late season extravaganza the Lavalle Racing operation will be well-represented. Brad Lavalle and his brother Christen will go head-to-head in the #6 and #06 Bone Stock machines, while John steers the team’s #06 Super Stock and Brad runs Tommy Podd’s #50 machine that was part of the team’s stable for some of the late season Super Stock events.

This year’s edition of the Autumn Colours Classic – presented by Lucas Oil Products and Pure Country 105 – rolls to the line October 11th to 13th at Peterborough Speedway. Pit gates open each day at 10:00, with technical inspection, rotating practice sessions and the first round of qualifying set to kick things into high gear. Also on the opening night agenda will be the annual Young Gun’s Races – presented by APC Auto Parts – for the Mini Stock and Super Stock divisions.

For complete Autumn Colours Classic details and the latest news and information, head to www.peterboroughspeedway.com or check the track’s Facebook and Twitter social media platforms. There is also a free app available for smartphone users.