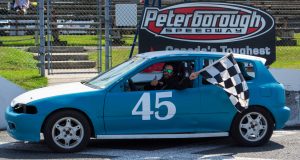 Action for the 2021 edition of the Canadian Legend Car Asphalt Nationals continued Sunday, August 29th with the home track Bone Stock and the travelling Outlaw Midgets and OSCAAR Hot Rod classes sharing the spotlight with the Trailers Plus Ontario Legends Series for an afternoon dance on Canada’s Toughest 3rd Mile Oval.

Like many local tracks, Peterborough Speedway has held a long tradition of showcasing its regular weekly classes in extra-distance events. Sean Kennedy and Alex Lees paced the Battlefield Equipment Rental Bone Stock teams to the Great Canadian RV green flag for their 50 lap feature. At the drop of the green flag, Lees and Ryan Oosterholt showed their strength and had caught-up with the back of the field with about 5 laps on the scoreboard. During the race’s first caution period – for an issue in the 3rd turn – with 17 laps complete, a storm front blew in and caused a delay of more than an hour. Back under green, Oosterholt took the lead at the 20 lap mark and held it for the balance of the event. Kris Khan, Kyle Novis, Mark Griffin and Lees completed the top 5.

Kyle Novis and Oosterholt each had a pair of Bone Stock qualifying heat wins.

Postscript: Even though they were the first cars across the line, Ryan Oosterholt and Kris Khan were disqualified due to issues in technical inspection. The No. 79 of Oosterholt had an incorrect engine for the year, make and model of the car. No. 48 of Khan violated the left-side weight percentage rule. After the penalties were assessed, the revised top 5 finishing order is Kyle Novis, Mark Griffin, Nick Lees, Steve Finnegan and Jake Kelly. 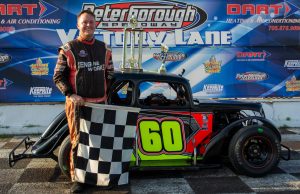 With 40 laps on the table, Parker Traves and Matt Haufe brought the Ontario Legends Series teams to the green flag for round 2 of their marquee weekend. Haufe jumped into the lead from his outside front row starting spot and despite a challenge from Adam Cuthbertson, held it through the early stages. Traves took the runner-up spot with an inside line pass on the 8th lap, that also brough Nicholas Ledson, Kevin Foisy and Hudson Nagy into the mix. With lapped traffic coming into play around the 13th circuit, the leaders were running a strong battle for position. Traves was able to get around Haufe for the lead at lap 26, as Ledson took 2nd. Through the closing stages, the Gravenhurst, Ontario runner showed the fast way around and took the win. Ledson, Haufe, Foisy and Nagy completed the top 5. Traves had also won the Legends Car dash earlier in the day.

Richard Woodland and Jody Bound led the way as the Outlaw Midget Series hit Canada’s Toughest 3rd Mile Oval for the first time in the 2021 season. 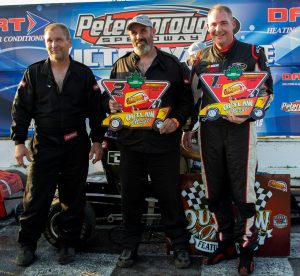 Dave Bradley joined the fight, but it was Mike Bradley who made a move and took the lead with 19 laps on the scoreboard. There were strong battles all around the track but when the checkered flag waved, it was Dave Bradley who took the win over Larry Lawson and Woodland. Fans can follow the tour by visiting www.outlawmidgets.ca.

Teammates Sean Walker and Gary Hannah shared the front row as the OSCAAR Hot Rod teams took to the track for their 35 lap feature tilt. Hannah took and early lead with Steve Book, Dave Waite and Tyler Hawn thrown into the mix. Book grabbed the lead away with 5 laps on the board but surrendered the

spot to Hawn just a lap later. Slower traffic came into play on lap 16, around the same time as the race’s 2nd caution flag. Hawn managed to hang onto the top spot as the field worked through lapped traffic and took the checkered flag over Brandon Robertson, Book, Waite and Hannah. For information on the OSCAAR Hot Rod Series, see www.oscaar.ca.

Preliminary round qualifying went to Waite, Book, Hawn and Robertson.

All posted finishing orders are unofficial and subject to scoring review, as well as post-race safety and technical inspection.

Bullring bullet points: Trista Murphy of Pickering took home a ‘Share the Wealth’ jackpot of $272.00 from the event…A predicted rainstorm blew into Central Ontario and washed-out the last few rounds of pre-race practice. Once the track was race-ready, officials went into hurry-up mode and got things rolling about 10 minutes ahead of the advertised start time. Showers returned around the lap 17 mark of the Bone Stock feature and added a delay of more than an hour to the show…The game of musical chairs in driver seats continued Sunday, as Alex Lees took over the controls of Shawn Solomon’s Bone Stock. Former track champion Willow Barberstock returned to the driver’s seat and Coltin Everingham raced a No. 26x machine.

Racing at Canada’s Toughest 3rd Mile Oval continues Saturday, September 4th with the Championship Clash to conclude the 2021 regular season. On the program will be the home track Bone Stock, Mini Stock, Renegade Truck, Super Stock and Late Model divisions, along with the Ontario Modifieds Racing Series. Grandstand gates open at 5:00, with racing getting underway at 6:00. To comply with provincial contact tracing protocol, advance tickets are required. Order yours at www.eventsprout.com/events/peterborough-speedway-2000-ltd or use the link on the track homepage.