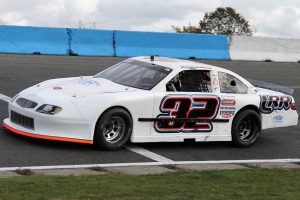 Action continues Saturday, October 7th with the second round of qualifying for the Friday night divisions and the first round for the Trailers Plus Eastern Ontario Legends. The OSCAAR Midgets will run their heats, ‘B’ main and feature events. Pit gates will open at 10:00, with racing getting started at 3:30.

Bullring bullet points: Ron Allison of Peterborough left the opening night of the 2017 Autumn Colours Classic with $709 win in the 50/50 draw…There were a couple of issues during afternoon practice sessions, with Nick Goetz and Paul Pierik both being cradled off the track after contact. Goetz pulled a back-up car from his hauler, while Pierik – who was also scheduled to run with the Trailers Plus Eastern Ontario Legends – had help from crew members, neighbouring teams and friends as they tried to get the #33 Late Model repaired…Quebecer Samuel Charland – who was making his first career Peterborough Speedway start – was also involved in a crash, but hard work by his crew got the car back on the track…Bailey Jacobs made his first career Autumn Colours start in a car the team acquired following the 2016 season, while Tim Burke – the 2017 Renegade Truck division champion – steered Jacobs’ former ride in his Thunder Car debut…Brandon Watson qualified his Pro Late Model and also hot-lapped an OSCAAR Super Late Model that had yet to have its graphics package applied…Short track racing has always been about friends and family. Helping in the pits of recent Velocity 250 Late Model winner Danny Benedict were the driver’s father, his girlfriend, along with former OSCAAR Modified driver Max Beyore and past Peterborough Speedway Late Model champion Craig Graham.

Full event details and information can be found by selecting the ‘Autumn Colours’ tab at www.peterboroughspeedway.com, checking the track’s Facebook page or Twitter feed. Fans can also download the free speedway app for their Smartphone.