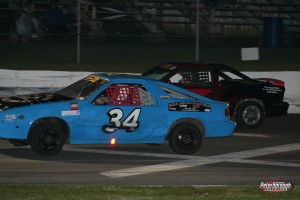 Another warm night, another exciting night of racing at Canada’s Toughes and Fastest 1/3rd mile oval.

The Parry Springs Renegade Trucks Saw Ross Evans (#30) whin his first 2 heats and pull off a close 2nd place finish in the feature race behind the Parry Springs sponsored #29 of Rick Edgerton.

The Battlefield Equipment 4Funs saw the domination of the rest of the field switch back and forth between the #19 of Ember Junkins and the #34 of Kevin Strutt but Darril’s Diecast Collectibles #34 of Strutt was in victory lane at the end of the night.

In the Peterborough Hyundai Mini Stocks, the battle heated up with a few veterans of the series and a sophmore battle it out. Daryl Fice #44 pulled off two impressive heat wins, and Tyler Junkin (#41) and Alex Lees (#07) each with a heat win.  The Cindarella story was that of sophmore Alex Lees (#07), with a win last night not far from his home track, this is the place he really wanted to pull off his first ever feature win at Canada’s Fastest & Toughest Third Mile Oval. With a tough battle between Mike Nelson (#85) and Fice (#44), the door opend in the last few laps for Alex Lees to park his Honda in the winners circle.

The Big story was with the Legends series comming to their home track, and Bill Mason #4, the statesman of the Legend Racing Series, pulling off his first feature win ever at Peterborough Speedway, and showing his appreciation to the fans thatkeep him coming back for more as he was putting a fresh set of donuts on the front strech. All this after being involved in a spectacular wreck in turn 1 at the beginning of the feature race.

Check our Website at www.peterboroughspeedway.com  for info on the Mid Summer Shootout brought to you by Country 105 next weekend