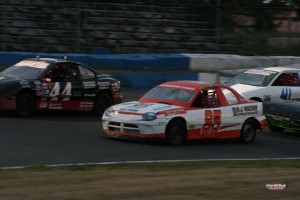 What happens when you have the warmest weekend of the summer so far, and the fastest cars on Canada’s Fastest & Toughest 1/3 mile oval? A C T I O N!!! for the Country 105.1 Mid Summer Shoot-out!

In the Hurricane Midgets, the #48 of Brian Woodland started off the night well back in the pack in his 1st heat, but he came into tonight with 3 feature wins in a row to his credit. That wasn’t enough for this race veteran.  Posting his 4th win in as many weeks was just one of the many stories tonight.

In the Parry Springs Renegade Trucks, Rick Edgerton post the first heat win, with Stacey Bierworth getting her 1st heat win of her career. But Rick Edgerton battled back to take the feature win.

The Battlefield Equipment 4Fun’s Had Mark Lavalle back in the driver’s seat of the #16 to pick up a heat win, Along with the Points Leader Kevin Strutt (#34). But with Strutt having mechanical failure during the feature race, it was the #19 of Ember Junkin pulling off an impressive Feature victory proving that her two previous “Chase for the Colours” wins was not a mistake.

Some of the most exciting racing in Ontario is the Peterborough Hyundai Mini Stocks, with the foursome of #41 Tyler Junkin, #44 Daryl Fice, #07 of the young gun Alex Lees, and the Championship points leader #85 Mike Nelson battleing it door to door from start to finish. But it was the R&J Machine/Daryl Taylor Painting/Napa that “Got the Good Stuff” with the big Feature Win tonight under a red sky.

In the Late Model, a wreck early in the 1st heat that collected some of the fastest cars of the series including Jeff Bell #66, #91 The “Hitman” and #97 of Jeff Toms.  All 3 cars were able to make repairs to come back for the feature race and it was a battle to the finish between the fast and smooth running Bell (#66) and the rough running/missing engine of #91 the “Hitman” for a green white checker finish… How the “Hitman” can pull off such an amazing win no matter how bad his car works is a mystery, but he pulled it off… Again!