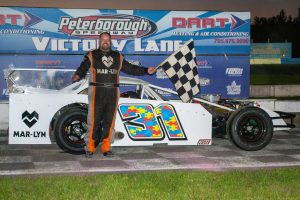 It may have taken a couple of weeks longer than expected, but Josh Gruntz didn’t mind waiting for his first ever main event win with the Ontario Modifieds Racing Series – powered by Torque Builders Inc. and Gen 3 Electrical – Saturday, June 8th at Peterborough Speedway.

The Peterborough native – who now makes his home in Little Britain – wheeled his #31 open wheeled machine from the inside of the front row on a very busy night at Canada’s Toughest 3rd of a Mile Paved Oval. Gruntz jumped out to an early lead, when Randy Hollingsworth – who started alongside – experienced some issues and dropped-off the pace and pulled to the infield pit lane.

Gruntz was having a strong run at the point and built-up nearly a half track’s advantage, while about 7 others battled for position in his rear-view mirror. Dwight Brown – a former series champion, who was making his first start in a few years – moved into the 2nd spot, who Chad Strawn slipping into 3rd. The race had all the makings of a caution-free ride, but just as the leaders were closing on the backmarkers, a yellow flag flew for an issue in the 4th turn.

The leader had the entire field barking at his back bumper and despite a late race charge from Chad Strawn, he picked-up the checkered flag in the 2019 Ontario Modifieds Racing Series opener. Brown, John Baker Jr. and Nick Lees completed the top 5. Bob Franks, Rob Warnes, Brad Stevenson, Willow Barberstock, Alex Cuzilla, Rick Warnes and Hollingsworth rounded out the running order.

Ontario Modifieds Racing Series notebook: It was a tough opening night for Craig Scott. The driver of the #69 machine burned his arm early in the night and couldn’t race. Luckily, former series champion Donny Beatty was on hand and offered to take over…but the car developed an oil leak and was sidelined for the night…Dwight Brown’s return came with a new car number. Having used #2 in the past, his 2019 effort carried #61, in tribute to his stepfather, Bill Pickford…The #09 machine of Nick Lees recorded a 5th place finish on the night. A former Autumn Colours Classic winner, he’ll share the seat with his twin brother Alex throughout the year…The series returns to action Saturday, June 22nd at Peterborough Speedway.