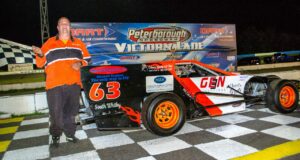 The last time John Baker Jr. raced at Peterborough Speedway his car came back to the pit area hooked to a tow truck and his team needed the help of friends to load the heavily damaged piece into the hauler for the trip back home. Saturday, July 23rd the former Ontario Modifieds Racing Series champion had a much happier ending to his story, as he wheeled his No, 63 machine to the checkered flag in the 20 lap main event.

Rick Warnes and John Baker Jr. brought the pack to the green flag, with JBJ taking the early lead from his outside front row starting spot. With close to 15 cars in the field, there was plenty of action all around the track. As Baker Jr. built-up nearly a 10 car length advantage over his nearest competition. Rob Richards – who has been very strong in his inaugural season with the series – moved into the runner-up position as the leaders started to move through slower traffic near the halfway mark.

With action all around the track, John Baker Jr. was working his way through the field. With around a handful of laps remaining, Richards was looking to find a way past the leader but his charge came up a little late. After a break to make some major repairs to the car, JBJ was back in the Ontario Modifieds Racing Series, presented by GEN-3 Electrical winner’s circle with a caution free victory at Peterborough Speedway. Richards, Alex Cuzzilla, Nick Lees and Chad Strawn were next across the line. Tyler Bouillon, Bob Franks, Shane Pollock, Robert Warnes, Ben Gruntz, Randy Hollingsworth, Willow Barberstock, Robert Maebrae and Rick Warnes completed the finishing order.

Ontario Modifieds Racing Series notebook: John Baker Jr. wasn’t only a winner on the racetrack. He concluded his Victory Lane interview by proposing to his girlfriend Cheryl, who responded with a resounding ‘yes’…

The OMRS driver ranks continue to grow. Robert Maebrae – a former snowmobile racer – made his series debut, finishing 13th in his No. 57 machine…Nick Lees also made his return to action in the No. 09 ride. He’ll be sharing the car with his brother Alex.