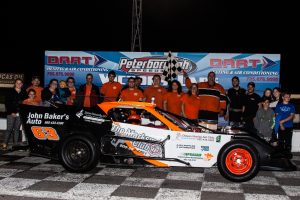 His 2017 season had been plagued by bad luck and mechanical gremlins, but Saturday, August 19th John Baker Jr. made the transition to race winner, when he claimed his first Ontario Modifieds Racing Series victory of the year at Peterborough Speedway.

Starting on the front row, alongside another former champion Rob Warnes, Baker took the lead from the drop of the green flag, but his charge was short-lived when a multi-car incident coming off the 4th turn produced a red flag. No one was injured in the wreck, but the machines of Duane Cinnamon and Willow Barberstock were sidelined for the rest of the event.

Baker had a strong car, but 2-time feature winner Brad Stevenson – who had started from 6th spot – was moving through the field. The 25-lap feature had a number of yellow flags that slowed the pace, but there was no keeping the crowd favourite from earning a trip the winner’s circle. Stevenson held-on for second spot, with Mark Gordon, Brendan Adams and Stu Robinson Jr. completed the top 5. Josh Gruntz, Rob Warnes, Chris Burrows, Randy Hollingsworth, Craig Stevenson, Cinnamon and Barberstock rounded-up the finishing order.

Ontario Modifieds Racing Series notebook: Brad Stevenson, Stu Robinson Jr., Brendan Adams and Duane Cinnamon won qualifying heats earlier in the event…OMRS – in association with the #77 team of Brad Stevenson – gave away a pair of children’s bikes in random chance Fan Appreciation Night draws…The series proudly welcomed a new marketing partner – Gen 3 Electrical Contractors – who attended the Peterborough Speedway show…Brendan Adams was wheeling the #4 machine, in place of Connor James who was running with the Lucas Oil Sportsman Cup Series…Next on the schedule for the popular open-wheeled tour is a Saturday, August 26th date at Canada’s Toughest 3rd of a Mile Paved Oval.