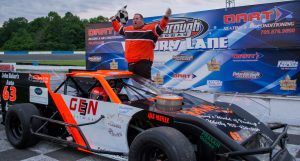 It may have taken a bit longer than first anticipated but in the tour’s first start since late in the 2019 schedule, fans of the Ontario Modifieds Racing Series, presented by GEN-3 Electrical saw teams put on a show – Saturday, July 17th – during the Summer Kick-Off at Canada’s Toughest 3rd Mile Oval.

Chad Strawn and multi-time series champion John Baker Jr. paced the starting field to the line for the 25-lap affair and within seconds of taking the green flag, Strawn was a man on a mission to claim the year’s first checkered flag. With Baker Jr. in his rear-view mirror, the pilot of the No. 77 machine had built-up a strong lead and was working his way through slower traffic as the lap counter showed 9 circuits complete.

The lead duo had moved out to nearly half a track’s advantage over 3rd place running Alex Cuzilla, who was named rookie of the year during the 2019 season. A single car spin in the 3rd turn with less than a handful of laps remaining slowed the pace and it was on the restart from that yellow flag that everything changed for the race leader.

“I messed-up the restart and the car was really loose off the corner,” admitted Chad Strawn in a social media post. “That gave JBJ a good run going into the first turn. He had cleared me, but I was hoping he thought he wasn’t clear and was going to leave me room to get back my spot. I ended up bumping into him trying to jam in back in there, spinning myself out.”

John Baker Jr. led the balance of the race distance and collected the win. Strawn regrouped and finished 5th. The pair chatted in victory lane, where Chad Strawn offered a handshake as an apology. Baker Jr. gave his racing friend a hug and called it a day.

Ontario Modifieds Racing Series Peterborough Speedway notes: After running No. 62W throughout her career, Willow Barberstock has switched to No. 67 as a tribute to the memory of her friend Melissa Bullen…James Townsend ran the No. 52 OMRS Mod from the Mark Gordon team…The Ontario Modifieds Racing Series is slated to return to Peterborough Speedway Saturday, August 14th. Tickets for any 2021 events at the track need to be purchased in advance, using the online platform www.eventsprout.com/events/peterborough-speedway-2000-ltd. There is also a link available on the venue’s website.

For the latest schedule information, driver profiles and more, visit www.facebook.com/OMRS or www.ontariomodifiedsracing.com.