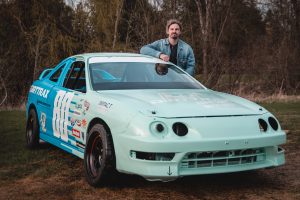 Change can be a good thing; even as it applies to the weekly racers at their hometown speedway. After claiming a pair of track championships in the 4Fun/Bone Stock division and finishing 3rd in last year’s standings, Jeremy Kelly has confirmed plans to move to the Jiffy Lube Mini Stock field for Peterborough Speedway’s 2019 schedule.

With the first action of the year just over a week away, the 32-year-old filmmaker from Ennismore, Ontario – who now makes his home in Downtown Peterborough – has been kept busy going through the pre-season checklist for his new equipment. Kelly admits he’s a little nervous about his first year of running with a different group of racers, but he’s just as excited about the challenges the opportunity will bring.

“I had a great time running against my brother Jake and the rest of the characters in the Bone Stock class,” Jeremy Kelly said. “You can’t help but make a lot of friends when you’re racing at this level. No matter how badly everyone wants to hold that checkered flag in victory lane. Despite all the running, the drama and the rest of the racing we do, we’re still building each other up and out there having the time of our lives.”

The Country 105 Season Opener – Saturday, May 18th – at the venue known as Canada’s Toughest 3rd of a Mile Paved Oval offers Central Ontario race fans an action-packed night, with free spectator grandstand admission. Gates open at 3:00, with the first qualifying event leaving the staging area at 5:00. At intermission, there will be a fan appreciation autograph session on the front straightaway.

Looking ahead to Saturday, May 25th sees the first of this year’s extra distance feature events, with a 50 lapper for the Jiffy Lube Mini Stocks. Also on the card will be the home track Bone Stock and Super Stock divisions. The Ontario Modifieds Racing Series, Ontario Pro Challenge and OSCAAR Pro Sprints will make their first appearance of the season with pit gates opening at 1:30, spectator grandstands unlocked at 4:00 and racing at 5:00.

Be sure to keep a close eye on www.peterboroughspeedway.com and watch the Facebook and Twitter social media platforms for complete news and information. Search for Peterborough Speedway where you pick-up your Smartphone apps and keep the track at your fingertips throughout the season.