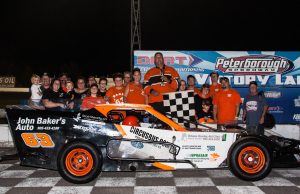 Former Peterborough Speedway 4Fun/Bone Stock track champion Willow Barberstock and her grandfather Randy Hollingsworth led the pack of 13 OMRS machines to the green flag for their 25 lap feature tilt. Before a single lap had been scored, the red flag was displayed for an issue in the first turn. To avoid another car, Tyler Betts – who was steering Rob Warnes’ #95 ride – shot-off the first turn. The car made contact with the retaining wall and needed to be towed from the scene. Luckily Betts – the 2017 home track Late Model champion – was unhurt.

Back under green, former series champion John Baker Jr. quickly worked his way into lead, bringing Josh Gruntz – another former Thunder Car/Super Stock regular – along with him. With slower cars becoming a factor with about a 5th of the race complete, Amanda Balson – who was making her first career Modified start, in Brad Stevenson’s #77 – closed on the lead duo and snatched 2nd place away from Gruntz with 11 circuits on the board. A lap 13 yellow bunched field and saw Anthony DiBello take the runner-up spot on the restart.

Ontario Modifieds Racing Series notebook: Balson, Baker Jr., Franks and Strawn each won an OMRS heat race…His second place main event finish was enough to clinch the 2018 series title for Anthony DiBello…Donny Beatty’s 8th place effort came at the wheel of Craig Scott’s #69 car. It was the first series start in a couple of years for the former tour champion…A 12th place showing was an impressive debut for newcomer Alex Cuzillla. The former go-karter was making his first start, after participating in a couple of the OMRS ‘Test-a-Mod’ sessions.