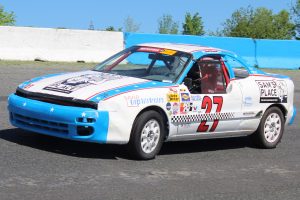 There are few local racers who approach the sport with the same level of enthusiasm as Jack Hannah. Once a week, he trades his seat behind the massive steering wheel of his Peterborough Transit coach for the similar; albeit much smaller controls of his Bone Stock machine at the venue known as Canada’s Toughest 3rd of a Mile Paved Oval.

A popular local fixture around Peterborough Speedway for nearly 2 decades, Hannah – whose racing career began with an endurance event in 2001 and includes the Mini Stock Autumn Colours Classic championship in 2007 – has run at least once every season since his debut. There was a season in a Super Stock and couple of years away from the sport, before returning to competition full-time with a 9th place finish in the final point standings last year. The racer says he’s always out there to have a good time with his friends.

“Until just a couple of years ago, this division was called 4-Fun. That makes it the perfect place for me to race,” said the driver whose Facebook page is called ‘Happy Jack Racing’. “I try to race hard and run everyone clean, but if I wasn’t having fun out there, I’d be sitting in the grandstands with the rest of the fans.”

Just a few months after finishing 4th in a ‘Planes, Trains & Automobiles’ themed burned-out wood-panelled 1988 Chrysler LeBaron convertible in the 24 Hours of Lemons Rally from Pennsylvania to Alabama, Hannah made his 2019 debut in a reworked Bone Stock machine at Peterborough Speedway. Using the same equipment that earned the Best Appearing Car honours a year earlier, the racer who’ll celebrate his 52nd birthday in July – and whose sons Brandon and Neil have also raced at the track – says a fellow competitor pointed-out that there was something missing from the new paint scheme.

“Because of the blue and white design we’d picked to have on it this year, Erin Kearns said the car looked like something that fictional TV stuntman Super Dave Osborne might drive,” Jack Hannah said, with a laugh. “The next week, she showed-up at the track with package of white stars and put them on the car to complete the look. I guess from this point forward, I should ask the track announcers to refer to me as ‘Super Jack Hannah’.”