As in the investment world, the phrase ‘past performance does not guarantee future results’ could also apply to weekly short track stock car racing. After claiming last year’s Thunder Car track championship at Peterborough Speedway, Howie Crowe’s strong performance during the 2017 schedule has been met with less than expected results.

Even with a new car at the team’s shop on the Alderville First Nation, the soft-spoken former boxing champion with the United States Marine Corp actually took a few weeks off during the middle stages of the year to regroup before coming back to the track a few weeks ago. Crowe says that while it was tough to be on the sidelines, he also believes it was the best move for the Crowe Boyz Racing team.

“We weren’t getting the finishes we’d been used to and other than showing our support for the other teams we’ve been helping, there wasn’t much to cheer about,” Crowe admitted. “I think I came back at the right time. The car feels great on the track and that can always translate into some strong finishes. That’s good thing, heading into Autumn Colours.”

With some impressive qualifying event finishes to fuel his adrenaline level, Howie Crowe took the green flag in the Saturday, August 26th Thunder Car main event from inside the front row. The race’s original start was short-lived, when the driver on the outside of the front row made hard contact with the retaining wall and couldn’t continue. Even with a hard-charging youngster on his tail, Crowe – one of the most experienced runners in the field – survived a late race yellow flag with just 5 laps remaining and held on for the win.

“It was good to finally see what this car could do and having Mark and Kyle Gordon join me in victory lane made the night even better,” Howie Crowe said. “One win doesn’t make-up for the entire season, but it’s a start. The crew put some fresh pages into our set-up notebook and we’ll be ready for next week and the big event at the end of the year.” 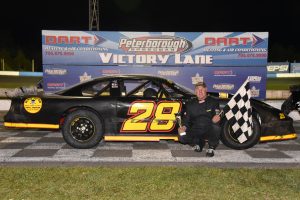