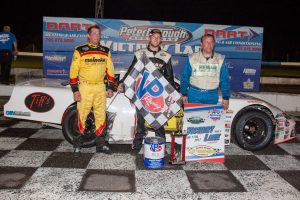 Seasons are about to change and as spring transitions to summer there is still plenty of short track action on the agenda at Canada’s Toughest 3rd of a Mile Paved Oval. Saturday, June 17th the APC Pro Late Model tour brought 100 laps of excitement to a show that also included the home track Battlefield Equipment Rental 4Fun, Trent Lakes Complete Plumbing Renegade Truck and Thunder Car divisions at Peterborough Speedway.

Rob Richards and Steve Mayhew brought the Thunder Car field to the line to kick-off the night’s feature race action. An early yellow flag before a lap had been scored caused a complete restart and James Townsend jumped out to the lead a few laps later. Anthony DiBello was marching toward the front and moved into second spot with 11 laps on the board and took the lead with less than a handful of circuits remaining. Townsend held-on for second at the checkers, with Dan Archibald, Fedele DiBello and Richards following the lead duo across the stripe. 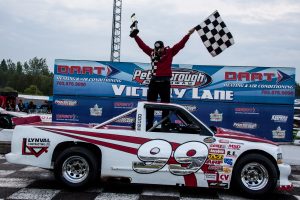 their feature race. Tim Burke used lapped traffic to his advantage and took the top spot as the scoreboard showed 7 complete and never looked back. Switzer, Hennessy, Stephen Bierworth and Brandon Vennor rounded-out the top 5.

Keith Parkes and Jake Kelly brought the Battlefield Equipment Rental 4Fun crew to the Great Canadian RV green flag for their 20 lapper. Kelly took the lead with 3 laps down and despite a strong run by last week’s main event winner Sean Kennedy, made it to Dart Heating & Air Conditioning victory lane for his first win of the year. ‘Pops’ MacDonald was second, with Kennedy, Jeremy Kelly and Parkes next to cross the line. 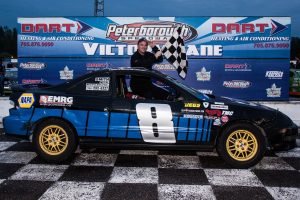 Bullring bullet points: A rain shower during the opening round of practice for the APC Pro Late Model Series caused track and series officials to call an audible where scheduling was concerned. All cars received practice time after the first round of heat races for the home track classes were completed…It was Ryan Babin’s turn to wheel the #26 machine in the 4Fun division. The former Mini Stock track champion and former part-time OMRS runner has temporarily stepped away from the sport after buying a house during the off-season…After struggling to get his car to the track in recent weeks, Brandon Feeney borrowed a truck from Boundy Roofing, one of his sponsors and finished 8th in the Thunder Car feature event.

Next on the calendar at Peterborough Speedway is the annual Autism Awareness Night Saturday, June 24th. On track action will include the hometown Jiffy Lube Mini Stock and Trent Lakes Complete Plumbing Renegade Truck divisions; along with the Can Am TQ Midgets, Trailers Plus Eastern Ontario Legends and Ontario Modifieds Racing Series. Pit gates open at 3:00, with the spectator grandstands unlocked at 5:00 and the first green flag at 6:00.