A new month of action kicked-off – Saturday, August 5th – with the first event of the 2017 Hot August Nights Racing Series and the Touring Chase for the Colours Pole Qualifier to determine the front row starters for the Autumn Colours Classic, featuring the OSCAAR Super Late Models, Modifieds and Midgets; along with the home track Battlefield Equipment Rental 4Fun and Jiffy Lube Mini Stock divisions at Peterborough Speedway. 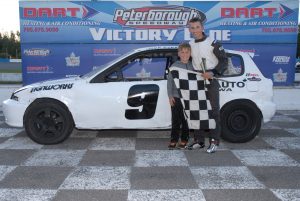 Feature race action got underway with a 20 lapper for the Battlefield Equipment Rental 4Fun crew, with Keith Parkes and Chris Tubman on the front row. Tubman grabbed an early lead, with Parkes close behind. Sean Kennedy moved into the 3rd spot with 8 laps complete, as the field worked around Canada’s Toughest 3rd of a Mile Paved Oval. The leaders caught the tail-end of the pack with 14 laps complete and Ryan Oosterholt used the opportunity to put his dog into the fight. A lap 17 yellow flag slowed the pace and created a late race showdown. As the checkered flag waved, Sean Kennedy added another win to his 2017 total, with Parkes, Oosterholt, Jeremy Kelly and Tubman following the #9 car across the line. 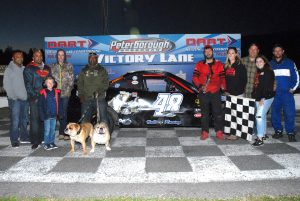 – jumped-out to an early lead and took control of the event, catching the back of the field with just 6 laps on the board. The rest of the top 5 would close ranks as the leader worked through traffic, but Townsend would never relinquish the lead and celebrated his birthday with a trip to the winner’s circle. Noel Snow and Kevin Strutt followed the leader across the line. Other than a yellow flag for debris before a single lapped had been scored, the 20-lap main event ran caution-free. 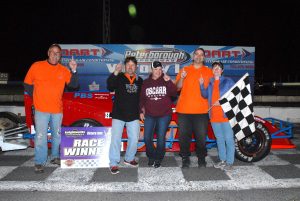 Gary Elliott and Mark Gordon paced the OSCAAR Modifieds to the line for a 30-lap feature that would determine the front row for the 25th Annual Autumn Colours Classic. Elliott took an early lead, but Luke Gignac was looking for his time at the front. After trying to slip past on the bottom, the #99 machine headed for the outside line and ran alongside the leader for a few laps, before a lap 13 caution flag. Gignac took the lead on the restart and had built-up a 10-car length advantage. As Gignac was crossing the line for his second main event win of the year, the 2nd and 3rd place running cars came together, giving those spots to John Harper and Chris Milwain. Cory Horner and Dale Reinhart rounded-out the top 5. 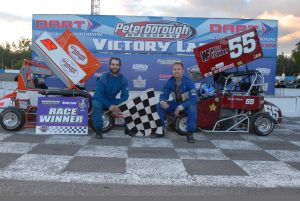 OSCAAR Super Late Model teams ran a pair of 35 lappers. Charlie Gallant taking the opening round, over Tyler Hawn, Kelly Balson, Adrian Foster and Dario Caprichio. Balson led from start to finish in the second round, with Hawn, Caprichio, Passer and Glenn Watson finishing the fast 5. Tyler Hawn will start the Autumn Colours Classic OSCAAR feature from the pole position, with Balson on the outside of the 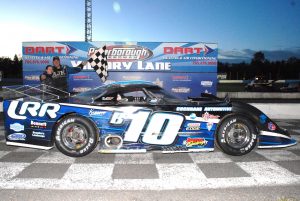 Bullring bullet points: Prior to the night’s action getting underway, a moment of silence was observed to honour the memory of long-time fan and former track head starter Ron “Rocket” Johnstone, who passed away earlier in the week…Bowmanville’s Carl Barrett won the night’s 50/50 draw of $475, in support of the Millbrook Legion…It was a bit of a rough night for Gary Elliott. An incident on the backstretch near the halfway point of the OSCAAR Modified feature relegated him to a finishing spot outside the top 5. The Canadian Ironman is on a run to record his 800th consecutive start this season. If everything goes according to plan, the landmark event will occur during the Autumn Colours Classic…Fan favourite Dan Price had a night he’d rather forget. An issue with a front-end component forced him to miss most of the pre-race practice session. As the pack came back to speed following the lap 13 caution that had knocked Elliott from the lead, Price’s #09 machine made hard contact with the front stretch wall.