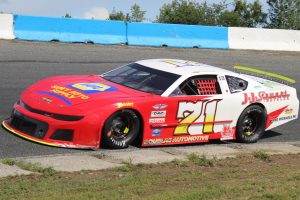 Summer Toonie/Fan Appreciation Nights – presented by Pepsi – are well-known for packing-in the crowds at Peterborough Speedway. Throw a 50 lap Late Model feature into the mix; along with the local Bone Stock, Renegade Truck and Super Stock divisions and the travelling Ontario Pro Challenge teams and you get a great evening of family motorsports entertainment for just a $2.00 admission ticket. Saturday, August 17th the tight, tricky bullring on Mount Pleasant Road pulled out all the stops for a thrilling night of racing excitement.

Each year, the weekly divisions get the chance to run extra distance feature events and the Late Models took their turn in the spotlight as Tim Batty and Mark Gordon brought the pack to the line. Gordon jumped out to an early lead, with Batty fighting back on the bottom before Jeff Walt moved into the 2nd spot. Slower traffic became an issue with just over a handful of laps complete, with last week’s winner and defending track champion Dan McHattie slipping into 3rd with 16 laps on the board. The race’s only yellow flag waved for a lap 19 issue on the backstretch. McHattie took 2nd on the restart and was leading just a few laps later. With as much as a half track advantage, the hometown favourite took control of the field while Dave Morgan and Jeff Walt fought over 2nd and 3rd in his rear view mirror. At the checkered flag, the #71 machine had logged another win. Gordon was 4th, with Tim Batty 5th. 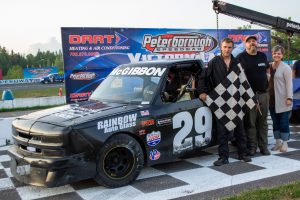 McGibbon used the inside line to perfection, taking the lead but Brad Lavalle was pushing hard for a turn at the front. The pair bumped a couple of times, but Lavalle couldn’t muscle his way into the lead. McGibbon protected the bottom groove all the way and didn’t even give-up the lead while working through lapped traffic. The caution-free feature came to an end with the entire field slipping and sliding around the track after a truck hit the first turn wall with just a lap remaining. Officials called the race complete at 19 of the 20 laps. McGibbon celebrated in victory lane while hooked to the tow truck. Lavalle, Boundy, Stacy Switzer and Jeff Dolley were credited with the next 4 positions. 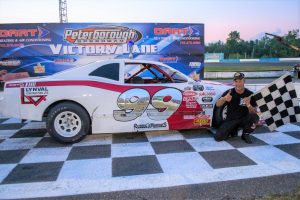 With teams looking for every possible advantage in the point standings, front row starters Paul Boundy and Marlie Owen paced the KOD Disposal Super Stock starting grid to the Great Canadian RV green flag. Owen showed her strength early, taking the lead from the outside line but her position at the front was short-lived as Tim Burke took over the top spot with just 3 laps on the board. Tyler Betts – taking another turn in Howie Crowe’s #28 – was pressing for the runner-up spot, but Owen held-off the charge. With Burke running away with things out in front, Owen, Betts and Mark Gordon were involved in a 3 car fight for 2nd. That’s the way the caution-free Super Stock feature finished, with Boundy taking the 5th spot.

Kyle Novis and Isaiah Switzer showed the way as the Battlefield Equipment Rental Bone Stock field came to the line. The initial green flag was brief, 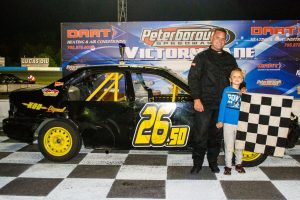 as a multi-car wreck on the backstretch brought things to a halt and eliminated 4 of the original starters. Steve Finnegan took the lead on the restart, with a 3 car breakaway back to Sean Kennedy who was running 4th. Defending track champion Ryan Oosterholt was looking for the second spot as the pack caught the tail-end of the field at about the three-quarter mark. After a rocky start, things went from green to checkered without another slowdown. Finnegan earned the win, over Oosterholt, Novis, Kennedy and Kris Khan. 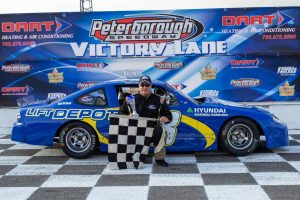 Bullring bullet points: A strong Summer Toonie Night crowd meant a solid 50/50 payoff of nearly $795.00 to Peterborough’s Lori Bond-Smith…Former Late Model feature winner Bryan Mercer and his family were in the stands, as was Brian Goudge, a past track announcer – who went by the name “Motor Mouth” – at Brockville and Capital City Speedways…Phil Jessup joined the Late Model field in his #44 car. Dave Morgan made his second straight start in the family-owned #10 Late Model, filling-in for his son Jack who was in a fishing tournament…Dan McHattie slowed to a stop on the infield pit lane, after losing a crank pulley during the 2nd Late Model inversion qualifier. He borrowed one from another competitor to make the main event starting grid. McHattie gave the winner’s trophy to Bobby Cousineau and his family to say thanks for their generosity.

Get the latest track news and information anytime from  www.peterboroughspeedway.com or the track’s Facebook and Twitter social media platforms. Need instant motorsports gratification? Search for Peterborough Speedway wherever you find your apps and take Central Ontario’s favourite place to race with you on your Smartphone 24/7/365.