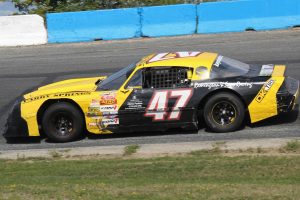 Sometimes, the stories that have happened behind the scenes can be just as interesting and entertaining as the action the fans see on the racetrack. Peterborough Speedway Super Stock driver Jeffrey Remington would fall into that category.

Early in his career, he took over from his father in the family-owned Thunder Car and earned the 2008 Rookie of the Year award at Kawartha Speedway. In 2010 he was a regular and finished 4th in the Renegade Truck division at the tight tricky bullring on Mount Pleasant Road, but recently his story has taken an unusual turn. The 37-year-old homegrown speedster finished 6th in the final 2019 standings his first full year back at the track.

“I built a car in 2008, but really didn’t race it much,” Remington said. “Rob Richards picked-it-up and had some good success with it. It wasn’t until a racing raffle in 2016 that the car came back into my life and got me fired-up about returning to the track. We took some of the pieces from the older one I got from Rob and incorporated them into the build of the new Camaro.”

Remington says there is even a story behind the new number on his equipment. With the team using #8 while his father Jim drove and #3 with Jeff behind the wheel; in tribute to his favourite driver Dale Earnhardt, the team’s yellow Camaro is branded with #47, in honour of the winning poker chip that brought the piece back home. The driver, who is the father of 2 young sons and attended Adam Scott Collegiate in Peterborough says he enjoys the chance to entertain his family and friends at the local 1/3rd of a mile oval.

“We’ve been working really hard during the off-season to show the fans how great this car can be when the green flag flies,” Jeffrey Remington says. “The crew of Joey Parkins, John Turcotte, Jim Remington and Ken Brooks are firm believers of what we’ll be able to accomplish starting with the Saturday, May 16th opening night. We’re really looking forward to getting the new season underway. I’m hoping for some good clean running throughout the year and another top 10 point finish.”

The driver – who works as a maintenance mechanic and enjoys spending time with his sons, camping, fishing and snowmobiling in his time away from the track – says he’s happy to have OK Tire, Parry Springs, Alisha Parkins, Webb Transmission, Zeebon’s Signs, Tripp’s Auto Recyclers, Mr. Transmission and engine builder Mark Elliott of Elliott Automotive supporting the Remington and Sons Racing Team throughout Peterborough Speedway’s 2020 schedule. He also appreciates the help of his girlfriend Jessica Junkin and says without her and their boys, nothing would be possible.

“I’ve been doing this on and off for about a handful of years and I think this could very well be our breakthrough season.”