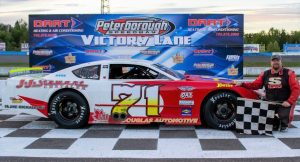 Temperatures during the week climbed to familiar mid-summer highs and while it was a little cooler by race-time, action on the track matched the mercury’s mid-week levels as the 2021 schedule rolled-on with the Summer Kick-Off, presented by Lucas Oil Products – Saturday, July 17th – at Peterborough Speedway.

Shawn Solomon and Angelo Novis brought the Battlefield Equipment Rental Bone Stockers from the staging area for the night’s first 20 lap main event. Solomon grabbed the early lead, with Jake Kelly slipping into 2nd. A quick caution flag for debris slowed the pace and brought Ryan Oosterholt into the fight. It was a 3-car battle for the lead, with Oosterholt taking the top spot with just 7 laps complete. Another yellow brought everyone back together but couldn’t delay the eventual outcome. Oosterholt picked-up another checkered flag over Kelly, Novis, Mark Griffin and John Lavalle.

Chad Strawn and John Baker Jr. paced the Ontario Modifieds Racing Series, presented by GEN-3 Electrical teams to starting line for the tour’s first headline dance of 2021. From the drop of the green flag, Strawn took off with just a single thought in mind. Getting to victory lane. The No. 77 ride was fast and the driver hit his marks lap after lap. He and Baker Jr. had nearly a half track’s advantage over the 3rd place car when the yellow flag waved for a single car issue. On the restart, the lead duo came together on the way into the 1st turn. Strawn’s car needed to be helped off a trackside curb, while Baker Jr. continued on his own. Baker Jr. scored the win over Alex Cuzzilla, Rick Warnes, Bob Franks and Strawn.

Strawn had a pair of OMRS heat race checkered flags, with Cuzilla and Baker Jr. taking the others.

With Kevin Strutt and Jeremy Kelly on the front row, the Jiffy Lube Mini Stockers rolled the Great Canadian RV green flag for their 20-lap feature.

Kelly moved into the lead early, with Brad Lavalle taking the runner-up spot. The leaders caught the rear of the field with less than a handful of laps complete as Ryan Oosterholt was marching through the running order. Looking for the lead at lap 17, Oosterholt took over the spot as racers saw the white flag. At the checkers it was Oosterholt, Kelly, Lavalle, Ember Junkin and Strutt.

Oosterholt continued his unbeaten 2021 season with a pair of Mini Stock opening round wins. Kelly and Strutt split the other 2.

Sean Walker and Steve Powell paced the pack of Late Model hopefuls to the line to wrap-up the second week’s feature race action. Powell grabbed an early lead, but the yellow flag flew before a single lap was scored. On the restart, Powell was back in front with Bryan Mercer running 2nd. The driver of the No. 81 had a strong piece and had as much as a 3-car length advantage until surrendering the top spot to Dan McHattie on lap 14. Try as he might, Mercer couldn’t regain the position and McHattie picked-up the first Late Model win of the 2021 season. Mercer, Robert Cousineau, Kyle Batty and Powell completed the top 5.

McHattie had a pair of qualifying heat victories, with Batty and Mercer splitting the others.

Results are unofficial and subject to scoring review as well as post-race safety and technical inspection.

Bullring bullet points: Even though tracks in other regions of the province cancelled shows because of rain earlier in the day, the Peterborough Speedway team rolled-off its complete show in just over 3 and a half hours…Blair Kelly of Peterborough collected $704 in the night’s 50/50 draw…2019 Mini Stock track champion returned to the track at the controls of Kyle Novis’ No. 45…James Townsend was at the wheel of Mark Gordon’s No. 52 OMRS Mod, with Willow Barberstock running No. 67 on her Modified, in memory of her friend Melissa Bullen.

Keep checking www.peterboroughspeedway.com and the track’s Facebook or Twitter social media platforms for the latest news and updates on the 2021 schedule at Canada’s Toughest 3rd Mile Oval.