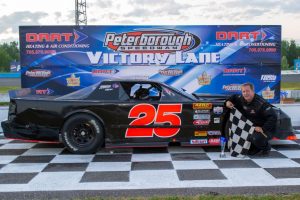 With a 50 lap feature on the table, the KOD Disposal Super Stock teams were first to roll from the staging area, with Tim Burke and Tyler Betts on the front row. Burke took the lead early, with Betts dropping down to the bottom from his outside front row starting spot. The first yellow flag waved for an incident in the 2nd turn, with just 3 laps on the board. Mark Gordon moved into the runner-up spot on lap 15 and was soon looking to find his way around Burke. The field started working through slower traffic with 21 circuits complete and Gordon got the position from Burke a lap later. In a breakaway for the top 4 cars, Dan Archibald wrestled 2nd away from Burke but ran out of time in his pursuit of the leader. Mark Gordon continued his recent hot streak, with his 3rd straight win. Burke, Betts and James Townsend were next across the line. 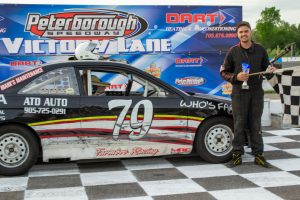 Todd Labadie and Ryan Oosterholt led the way as the 24 Battlefield Equipment Rental Bone Stock starters came to the Great Canadian RV green flag. Oosterholt – the reigning track champion – took the lead early and had the field following him through lapped traffic with just over half the race distance complete. Not even a hat-trick of late race caution flags would keep the #79 machine from another trip to the winner’s circle. Corey Strawn, Chris Tubman, Kyle Hope and Kyle Novis completed the top 5, as Oosterholt took the checkered flag. 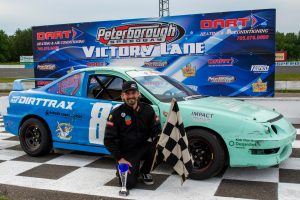 20 laps to settle the score. The yellow flag flew early for an issue in the 3rd turn, but with the field back under green Melissa Bullen took a turn at the front of the pack. Another caution flag – this time with 10 laps on the board – may have played a hand in the outcome of the race, as Jeremy Kelly took the lead on the restart and never looked back. Ryan Oosterholt, James Townsend, Ember Junkin and Tiffany Vandebelt rounded-out the fast 5. 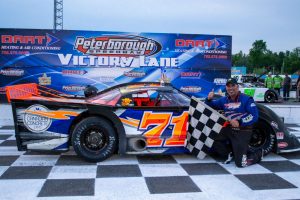 Gary McLean and John Cadman paced the Hoosier Racing Tire Ontario Outlaw Super Late Model – presented by the Canadian Concrete Expo – starting field to the line for a 50 lap headline dance. McLean took the early lead, with Cadman and John Owen joining in the 3 car breakaway.  Cadman took advantage of a door McLean left open and grabbed the lead with 9 laps complete. Following the restart from a lap 15 yellow flag, Owen was looking to take the runner-up spot from McLean; a move he completed on lap 17. Cadman saw his huge lead eliminated with a pair of caution flags just past the halfway mark, but as soon as the battle restarted again, he was back in control. To say the #71 machine was the class of the field would be an understatement. Cadman took the win over Stu Robinson Jr., Owen, McLean, Dario Capirchio, Glenn Watson, Brandon Passer, Rob Bickle, Chris Burrows, Jamie Richardson, Adrian Foster and Craig Stevenson.

Bullring bullet points: The night’s 50/50 draw – in support of the Millbrook Lions Club – awarded $555.50 to Steve Williams of Oshawa…James Townsend ran with the KOD Disposal Super Stock division, in a back-up car from Kyle Gordon’s team in addition to his #45 Mini Stock. Tyler Betts took another turn at the controls of Howie Crowe’s #28 Super Stock…Stu Robinson Jr. was tabbed to wheel the #40P Super Late Model, in place of Charlie Gallant…Inspection lane technical issues saw the #19x and #81 Bone Stock machines of Dave and Ethan Marco disqualified prior to the night’s feature event.

A full night of action – Saturday, July 27th – will close-out the second to last month of the 2019 regular season. Check out the Jiffy Lube Mini Stock, KOD Disposal Super Stock and Late Model divisions. The Ontario Modifieds Racing Series double feature events for the Trailers Plus Ontario Legends will also be part of the show. Just added to the line-up will be the Trent Lakes Complete Plumbing Renegade Trucks. Pit gates open at 2:30, with spectator grandstands unlocked at 5:00 and racing at 6:00.

Follow www.peterboroughspeedway.com or the track’s Facebook and Twitter social media platforms for the latest news and schedule information. There is also a free smartphone app available to let you take Central Ontario’s home track with you throughout the year.