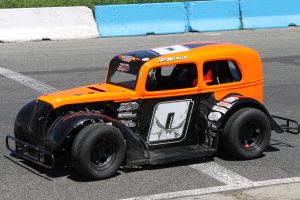 July’s Canadian Legends Asphalt Nationals is one of most anticipated events in provincial motorsports history. Friday and Saturday – June 1st and 2nd – fans got a preview of the prestigious event as the Trailers Plus Ontario Legends Series hosted back-to-back events at Kawartha Downs and Speedway and Peterborough Speedway.

A busy Central Ontario for the popular tour got started at the spacious 3/8th of a mile Fraserville facility, where the Ontario Legends served as a support division for the OSCAAR Modifieds and Hot Rod Series. The evening started with 26 cars in the pits and by the time qualifying had wrapped-up, there were 24 remaining for the green flag. Matt Haufe – the reigning Eastern Ontario Legends title holder and National Champion – climbed aboard his family-owned #7 machine to take the victory at the site of one of his first career wins. Alex McCollum, Kevin Foisy, Andre Fiorini and Miles Tyson completed the top 5.

The next night, the scene shifted about 20 minutes north on highway 28 to Canada’s Toughest 3rd of a Mile Paved Oval. Once again, there were 26 teams in the pit area, with 25 taking the command. Miles Tyson and Dave Riopelle brought the field from the staging area. Tyson took an early lead, with some excellent racing throughout the pack. Series invader Alex McCollum – of Phillipsburg, New Jersey – claimed the top spot with 4 laps complete and caught the tail-end of the field a lap later. Peterborough’s tricky turn 2 proved to be a problem spot, as yellow flags for single car issues slowed the pace on lap 10 and 13. Another caution flew with just over a handful of circuits remaining, but McCollum was able to hold-off a late race charge by Riopelle and take the checkered flag in the tune-up for July’s Canadian Legends Asphalt Nationals. Matt Haufe, Kevin Foisy and Wes Cuthbertson completed the top 5.