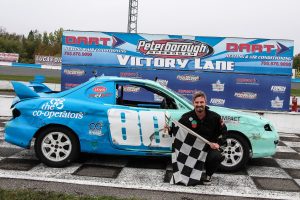 Try as she might, Mother Nature couldn’t derail the second day of action at the 26th annual Autumn Colours Classic – presented by Lucas Oil Products – at Peterborough Speedway.

The Saturday, October 6th schedule got rolling with the first of a pair of 20 lap features for the OSCAAR Pro Sprints. Bill Heatherton and Kevin Taylor brought the field to the green flag, with Taylor grabbing the early lead. His time at the front of the field was short-lived as the #15 of Jayden Riddle took over with just 3 laps on the scoreboard. Riddle hung-on for the win, with Daniel Hawn, Norm Newman, Ryan Battilana and James Stanley rounding-out the top 5. Just by starting the first feature, Hawn clinched the 2018 OSCAAR Pro Sprint point championship.

Next on the agenda was the second round of qualifying heats for the Battlefield Equipment Rental Bone Stocks, with Kyle Neumeister, Cory Strawn, Ryan Oosterholt and Kris Khan sharing the checkered flags. 2-time Autumn Colours champion Jessica James scored a pair of Outlaw Midget preliminary rounds, with the others going to Nigel Buttivant and Mike Bradley. 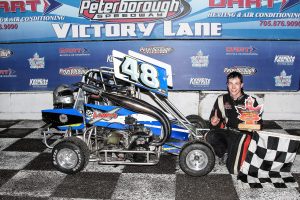 Norman Newman and Daniel Hawn brought the OSCAAR Pro Sprint field to the line for their second 20 lap feature event. Hawn grabbed the lead early and would never relinquish the spot. At one point, he had nearly a straightaway lead over his closest competition. Jayden Riddle, Ryan Battilana, Newman and James Stanley followed Hawn across the line.

Saturday’s final order of business was a 25 lap feature for the Outlaw Midgets, with Ryan Brown and Jody Bound on the front row. Bound took and early lead, but it wasn’t long before Jessica James became a factor. The driver of the #2 machine was looking high and low in her march to the front and took the lead with 11 laps on the scoreboard. Just when it looked like she’d claim another Autumn Colours Classic win, she coasted to a stop on the track apron. Jordan Howse took control from there and scored the win. Bound, Adam Carrothers, Nigel Buttivant and Amanda McColl completed the top 5.

Bullring bullet points: Saturday’s 50/50 payoff was worth $673.50 to Mike Ford of Walkerton, Ontario…Thanks to the co-operation of drivers, teams and visiting series officials, Peterborough Speedway staff was able to run off the second day’s events in a brisk fashion, leaving the Sunday schedule wide-open for main events. Track owner/promoter J.P. Josiasse and his team extend their appreciation to the fans for their patience during the unavoidable weather delays.

For the final day of this year’s Autumn Colours Classic – Sunday, October 7th – pit gates will open at 10:00, with the spectator grandstands unlocked at 11:30 and racing – beginning with the 75 lap Hoosier Racing Tire Outlaw Super Late Model feature event – taking the green flag at 12:30.

Full Autumn Colours Classic schedule information; along with the latest news can be found at www.peterboroughspeedway.com or by checking the track’s Facebook and Twitter social media platforms.