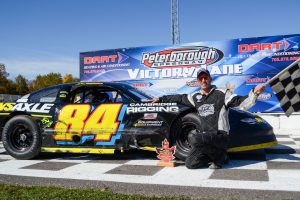 Blue – as in bright, blue skies – was the dominant colour as a day of main events thrilled a capacity crowd to wrap-up the 27th edition of the Autumn Colours Classic, presented by Lucas Oil Products and Pure Country 105 – Sunday, October 13th – at Peterborough Speedway.

Front row starters JR Fitzpatrick and Ryan Kimball set the pace early as the 2nd running of the Electric City 167 Late Model event took the green flag. The pair broke away from the pack and started working through the backmarkers with about 11 laps on the scoreboard. A pair of quick yellow flags – both for incidents in the 2nd turn – brought the field back together; but also sent some cars to pit road for some quick adjustments. 2019 track champion and multi-time Autumn Colours winner Dan McHattie started to look for an advantage in the outside line but dropped back to the bottom a few laps later. With everyone looking for a rhythm, the pack ran some consistent laps leading-up the planned competition caution. The second half of the race mirrored the first but a late-race caution – creating a green, white, checkered finish – brought the fans to their feet. Fitzpatrick was able to hold-off another charge from Kimball to take the win. Shawn Chenoweth, Jake Sheridan and McHattie rounded-out the top 5. 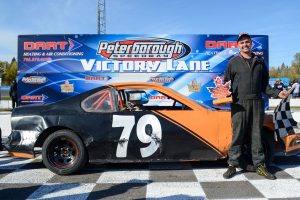 Gould on the front row. Warren Paxton managed to wrestle the top spot away from the lead duo with less than a handful of laps complete. After a couple of yellow flags, Ryan Oosterholt took a turn at the front but had to contend with Andy Kamrath, who charged from the back of the pack in a machine that had been plagued by engine issues from the moment it rolled through the pit gates. Not even a late race red flag following a crash on the front stretch could keep Oosterholt from the winner’s circle. Gould, Bobby Tolton, Jassen Whyte and Terry Woodley followed the leader across the stripe. 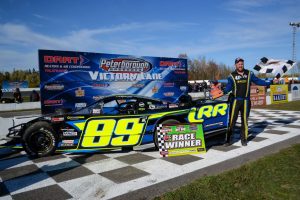 As the polesitter in the 50 lap OSCAAR Modified feature, Andy Kamrath was looking to put his bad luck in the rear-view mirror, as he lined-up along side Anthony DiBello for the green flag. With the ground-pounding, open wheeled stars setting a strong pace, the leaders started to catch the tail-end of the field with almost a dozen laps down. A couple of issues slowed brought the field back in touch with the leaders but Kamrath was untouchable, as he added another Autumn Colours Classic title to his resume. AJ Emms – who clinched the 2019 series title by taking the green flag was 2nd – with DiBello, Jason Keen and Norman Newman completing the top 5.

Dan Archibald and Ethan Constable paced the KOD Disposal Super Stock starting field to the green flag. Archibald led early, with the top 4 in the 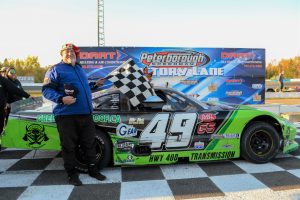 running order lining-up nose-to-tail on his back bumper. A yellow flag for a backstretch crash with about 15 laps complete helped pave the way for Frank Davey to take the runner-up spot with 17 circuits on the board. A pair of yellow flags and a late race red changed everything, opening the door for Davey – the 2019 Sunset Speedway track champion – to capture the checkered flag over Kenny Grubb, Todd Davenport, Cory McAllister and Treyten Lapcevich. 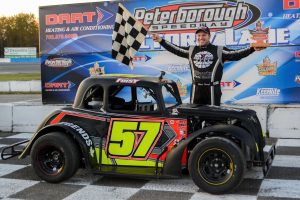 With 40 laps to settle the score, the Trailers Plus Ontario Legends Series hit the tight, tricky bullring on Mount Pleasant Road for the final time in 2019. Wes Cuthbertson and recently crowned Lucas Oil Sportsman Cup Series champion Connor James brought the field to the line. Miles Tyson wrestled the lead away from Cuthbertson with 6 laps complete, with former series champion Adam Cuthbertson moving into 2nd a lap later. The race’s first and only yellow waved for a 2nd turn issue with 11 laps on the board. Wes Cuthbertson reclaimed the lead on the restart but his brother took in back with 14 complete. Matt Haufe’s pass for the lead on lap 16 was the final swap of the day, as he moved out to a healthy advantage in lapped traffic. Kenny McNicol Jr., Tyson, Parker Traves and James followed Haufe across the line. 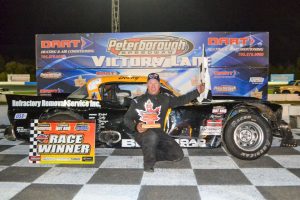 underway. Back under green, it was Book and Tyler Hawn in control of the field as they started working through slower traffic with less than 10 laps complete. The yellow flew a final time for an incident in the first turn, but no one could touch Book. Hawn was 2nd and clinched the 2019 championship. Billy Alderson Jr., Adrian Foster and Nick Clarke completed the top 5 spots.

The 27th running of the Autumn Colours Classic concluded with a 40 lap Battlefield Equipment Rental Bone Stock feature that had Steve Finnegan and Dave Feeney on the front row. Kris Khan took the lead with 3 laps down and led the field on a march through lapped traffic with 9 laps on the board. A pair of multi car wrecks on the front stretch brought the field back together, but only served to delay the eventual outcome as Kris Khan took the win over Kyle Neumeister, Nick Lees, Feeney and Jordan Morris. Post race tech handed to win Neumeister with Feeney being placed in second followed by Jordan Morris.

Bullring bullet points: Randy Patterson of Newcastle, Ontario split the Millbrook Legion 50/50 prize of $1600 with his friends…Canadian Iron Man Gary Elliott – who hadn’t missed a scheduled race since 1987 – made the final start of his Ontario racing career, before moving back to his native Nova Scotia later this fall.

Peterborough Speedway’s management, official and staff team would to thank the drivers, race teams and fans for their support during the recently concluded race season. Keep checking www.peterboroughspeedway.com or the track’s Facebook and Twitter social media platforms for news and information on the 2020 schedule.