There was a little bit of everything during the 26th running of the Autumn Colours Classic – presented by Lucas Oil Products – at Peterborough Speedway. From cool Fall nights, to rainy afternoons and exciting action on the race track. This year’s edition had it all. Everything wrapped-up Sunday, October 7th with the final events for 7 different divisions that also served to clinch a trio of 2018 season championships. 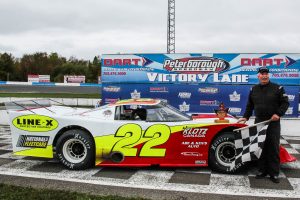 Glenn Watson and Brandon Watson brought the Hoosier Racing Tire Ontario Outlaw Super Late Model starting field to the line to kick-off the day’s schedule. With 75 laps to settle the score, the family reunion was the perfect kick-off to a Thanksgiving Sunday of action. Glenn Watson took the lead early, but his nephew was working the inside line and claimed the top spot with 4 laps on the board. A yellow flag – for a backstretch incident – slowed the pace with 8 complete, but Watson was able to hold onto the lead and started working through the backmarkers at lap 15. With the pack running some strong, consistent laps Brandon Watson built-up a solid lead. A lap 37 caution – that turned into a red flag – for a 3rd turn crash that ended the day for Jordan Howse. The turning point of the event came along with a lap 60 caution. Watson’s car had been sputtering and he took the #9 ride to the pits. Glenn Watson took the lead on the restart, with the former Autumn Colours winner now working through traffic from the rear of the field. Glenn Watson took the $2500 win. Gary McLean – in his first career Super Late Model start – was second. Ryan Kimball, Brandon Watson and Gary Passer completed the top 5. 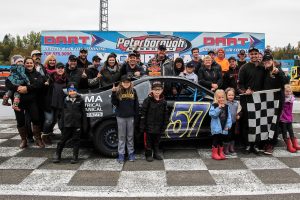 ‘A’ main. Oosterholt took an early lead, with Khan glued to his back bumper. The pace was slowed early, for a 4th turn issue with 6 laps complete. Oosterholt kept control of the pack on the restart, with a quartet of Peterborough Speedway regulars making-up the top 5. The #57 machine was working through the lapped traffic to perfect, all the while keeping Khan at bay. Not even a pair of late race caution flags – both for incidents in the 3rd – could keep deny him his first Autumn Colours win. Khan, Chris Tubman, Corey Strawn and Kyle Neumeister followed Oosterholt across the line. 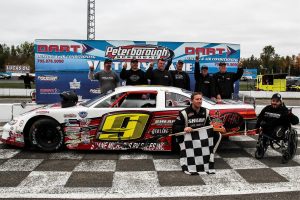 Brandon Watson and Ryan Kimball were on the front row for the inaugural running of the Electric City 167. Watson set the early pace, with former NASCAR Pinty’s Series champion Cayden Lapcevich on his tail. The pair broke away from the field and had things well in control through the race’s first yellow flags on the 23rd and 64th laps. Lapcevich – who kept looking for a way around Watson – found it on a lap 67 restart, only to give the position back 4 laps later. A yellow flag for a 2nd turn issue led to the competition caution and gave teams the chance to refuel and check tires. Watson held the lead on the restart and worked his way around the slower traffic. While Cayden Lapcevich started to fade in the late stages, JR Fitzpatrick and Kimball mounted a charge to the front. The #84 took over 2nd after a lap 135 restart but surrendered it to Kimball less than 20 laps later. Each driver tried, but they could wrestle the race win from Watson. Lapcevich held on for 4th, with Ron Sheridan 5th.

With 50 laps of action on the table, Justin Holmes and Brandon Passer brought the Super Stock field to the Great Canadian RV green flag. The front 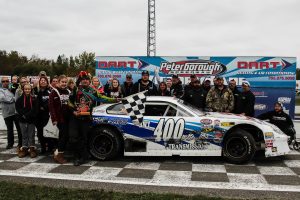 row starters broke away from the pack, but there was plenty of action going on behind them. A hard-charging Dan Archibald – who started 7th – had made it up to 4th with just over a handful of laps complete. Several yellow flags prevented teams from finding their rhythm and a red – for a multi-car wreck in the first turn – created a 10 lap shootout for all the marbles. As the checkered flag flew, the initial front row starters were first across the line. Holmes and Passer were followed by Jason Lawrence, Matt Bentley and Ken Grubb to round-out the Super Stock top 5. 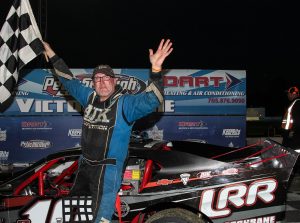 With the 2018 season point championship up for grabs, a pair of local favourites – John Baker Jr. and Kelly Balson – paced the OSCAAR Modified from the staging area for the 50 lap main event. JBJ took the lead early, with Balson looking to steal the spot; which he did by the 7th circuit. The first yellow flag flew a lap later, with title contender John Harper taking the 3rd spot on the restart. As lead duo ran through the backmarkers on lap 15, Harper took over 2nd. Caution flags on the 23rd and 32nd laps helped write a fresh page in the championship story, as Harper pitted to change a flat tire on lap 33. Cory Horner moved into 2nd as the lap counter showed 34 complete and survived a lap 37 red flag that blocked the entrance to the 1st turn. Even though he couldn’t keep Balson from an Autumn Colours Classic win, Horner captured the 2018 OSCAAR Modified title. Baker Jr., Shawn Chenoweth and AJ Emms were next across the line.

Andy Kamrath and Ryan Oosterholt showed the Jiffy Lube Mini Stock field the quick way around Canada’s Toughest 3rd of a Mile Paved Oval. Coming from 5th at the drop of the green, Warren Paxton made his way into the top 3 with a hat-trick of laps on the board. A red flag for a hard wreck in the 3rd turn brought things to a halt to check on drivers and clean-up the scene. On the restart, Paxton would continue his pursuit of Oosterholt – who was following Kamrath through the lapped traffic. After a lap 43 yellow flag for a 3rd turn issue, he was able to complete move but didn’t have enough time to catch Kamrath. Oosterholt, Nolan Gould and Corey Young were next across the stripe. 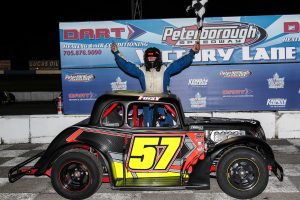 Front row starters Andre Fiorini and Wes Cuthbertson paced the Trailers Plus Ontario Legends starting field to the line for their 40 lap ‘A’ main. Fiorini – who won the first 2 races of his career earlier this season at Sunset Speedway – had as much as a 10 car advantage as the pack started to catch the tail end of the field with 11 laps complete. Matt Haufe moved into 2nd and was closing on the leader in lapped traffic, before taking over the top spot with 24 laps on the board. A pair of yellow flags – both for incidents in the 2nd turn – on lap 27 and 37 tightened the running order and allowed Kevin Foisy to take the win. Wes Cuthbertson, Haufe, Adam Cuthbertson and Dave Riopelle completed the top 5. Just by taking the green flag, Haufe clinched the 2018 Eastern, Western and All Ontario Legends Series championships.

All posted finishing positions are unofficial and subject to scoring review as well as post-race safety and technical inspection.