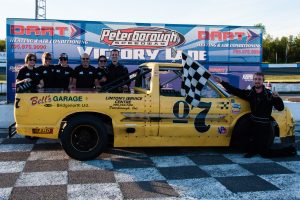 Feature event action took the green flag with the Trent Lakes Complete Plumbing Renegade Trucks, as Jordan Dallin and Jack Dallin brought the field to the green flag. From the moment he crossed the line, the former track champion’s #07 ride was the class of the field, jumping out to a lead of almost a straightaway over his closest competition. Jack Dallin took the win, over his bother Jordan. Tim Burke, Stacy Switzer and Stephen Bierworth rounded-out the top 5.

Rob Crick and Tyler Begbie paced the Battlefield Equipment Rental 4Fun pack to the stripe for their 20-lap main event. Former track champion and last week’s feature winner Jeremy Kelly squeezed through the middle with a pass on the front stretch to move into 3rd place and that was a sign of things to come. A lap after a lap 11 caution, he’d wheel into the 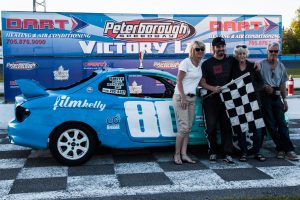 lead and survive a late race charge from Sean Kennedy for his second straight checkered flag. Keith Parkes, Baden Powell and ‘Pops’ MacDonald chased the lead duo across the stripe.

With Todd Delisle and Bryan Mercer showing the way, the Organics & Glass Late Model pack came to the Great Canadian RV green flag for a 50-lap feature tilt. Rebounding from a hard crash during the opening week of action, Dan McHattie took the lead with 8 laps on the board and began lapping cars just 3 circuits later. A string of yellow flags, including one with just a handful of laps remaining slowed the pace, but couldn’t keep McHattie from his first win of the young season. Chris Mitchell, Mercer, James Horner and Amanda Balson completed the top 5. 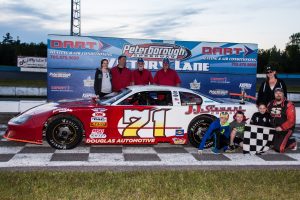 With Kris Khan and Willow Barberstock bringing the pack from the staging area, the Jiffy Lube Mini Stocks hit Canada’s Toughest 3rd of a Mile Paved Oval for their 20-lap feature. Khan – who took the win on opening night – grabbed an early lead and caught the rear of the field with only 3 laps down. A yellow flag for a front stretch incident brought everyone back together and gave Neil Hannah the opportunity to take the lead with just a couple of laps to go. After hitting the outside retaining wall in the first turn a week ago, Hannah’s #23 would hit Dart Heating & Air Conditioning victory lane. Another strong run by Kent Missons resulted in a second-place finish, while Kevin Strutt, Khan and Donovan Price were next across the line.

Cole Ledson and Dave Riopelle brought the Trailers Plus.net Eastern Ontario Legends Series to the track for their 25-lap feature event. The yellow flag waved before the first lap could be scored, meaning there would be a complete restart. Riopelle and former Legends champion Adam Cuthbertson were strong early, but all eyes were on the #88 of Matt Haufe, who’d be chasing his 4th win in as many EOLS starts. After following Cole McFadden for about half a dozen laps, the tight, tricky bullring on Mount Pleasant Road, west of the Liftlock City proved no match for the most dominant driver on the Eastern Ontario Legends tour, as Haufe kept his win streak alive. McFadden, Ledson, Riopelle and Jamie Riberdy followed Haufe across the stripe.

Bullring bullet points: Calvin Jessup Jr. of Oshawa, Ontario pocketed the night’s 50/50 prize of $1181.00…Tyler Betts saw a strong finish come to an end in the closing stages of the Late Model feature, when his #86 ride blew a right front tire and bounced off the wall…Amanda Balson finished 5th in the Late Model ‘A’ main, but her race wasn’t without its share of excitement, as the hood on her car flipped-up in front of the windshield while pack was running at speed…Willow Barberstock took advantage of a night off with the Ontario Modifieds schedule to return to familiar territory in a Mini Stock ride.