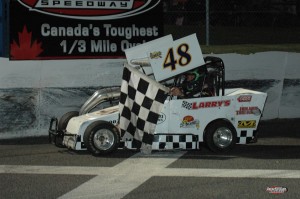 The day was hot, but the action was even hotter at Canada’s Fastest & Toughest 3rd Mile Oval. The Huricane Midgets returned with a few new faces and a few familiar ones, including the 99 of Adam Tyo winning his two qualifying heats, but was only able to pull off a 3rd place finish at the end of the night. A J Emms (#10) finished 2nd in the Feature race along with his two heats, but the night belonged to the A J Signs, BW Towing, & Larry’s Small Engines #48 of Brian Woodland with almost a full lap lead ahead of Emms and Tyo.

In the Parry Springs Renegade Trucks young Stacey Bierworth decided to let good old dad take the wheel on the eve of Father’s Day, and with the Auto Clinic #37 Stephen Bierworth parked it in Victory Lane.

The PeterboroughSpeedway.com Late Models had both visitors and track legends make their Season Debut tonight with the 66X of Jim Rossiter claiming a heat win and a 2nd place finish, but the team that has worked so hard to get their first season win was the Cal Jessup Trucking #55 of Darren Kearnan.

In The Peterborough Hyundai Mini Stocks it was a battle to the finish, and for the points lead between the #44 of Daryl Fice, #41 of Tyler Junkin and the #85 of Mike Nelson. With Daryl Fice having one of the fastest cars on the track, by the end of the night he had no stopping power with no brakes, thus was unable to make the challenge we expected against Nelson in the 85 finishing 2nd, and another win to the Junkin family of racers with the Tripps Auto Recyclers #41 of Tyler Junkin in victory Lane.

That’s the way we saw the race, come see it for yourself at Peterborough Speedway.