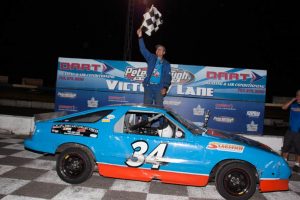 A hot, hazy and humid week came to an end just in time for Fan Appreciation Night – presented by Pepsi – Saturday, July 7th at Canada’s Toughest 3rd of a Mile Paved Oval. A strong crowd was on hand to see a scheduled 50 lap main event for the Super Stock teams, along with the hometown Battlefield Equipment Rental Bone Stock, Jiffy Lube Mini Stock and Late Model divisions; plus the Outlaw Midgets at the tight, tricky bullring on Mount Pleasant Road, west of the Liftlock City. 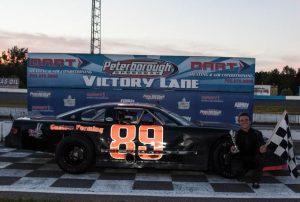 the front row for the Late Model 30 lapper. McHattie took the lead early, while Wallace looked for a chance to get to the inside lane. The #71 machine continued to lead after a lap 4 yellow, with Chris Mitchell and James Horner fighting it out for 2nd. McHattie saw an advantage of nearly 10 car lengths disappear with a couple of yellow flags near the halfway mark and another with only 4 laps remaining helped pave the way to James Horner’s first win of 2018. Wallace, Amanda Balson, McHattie and Brandon Feeney completed the top 5. 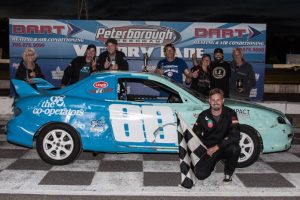 26 Battlefield Equipment Rental Bone Stock teams hit the track for the 20 lap feature, with Jeremy Kelly and Sean Kennedy on the front row. The lead duo ran nose-to-tail through the entire race distance and had caught the back of the field by the halfway mark. Kennedy took the lead after a lap 14 yellow, but Kelly took it back on another restart 2 laps later. At the checkered flag, the pair finished the race the same way they wrapped-up the 2017 point chase; with Kelly holding a slight advantage over Kennedy. Corey Strawn, Chris Tubman and Ryan Babin chased the leaders across the line.

Jiffy Lube Mini Stock action left the staging area for main event with Steve Brier and Erin Kearns leading the way. With the initial start waved-off due to a yellow flag before a lap was scored, Kevin Strutt grabbed the early lead and had caught the backmarkers with less than a handful of laps complete. Josh Bullen and Ryan Oosterholt battled for the runner-up spot, before the driver of the #79 secured the position as the field scored 16 circuits. Even a late race yellow flag couldn’t keep a hard-charging Kevin Strutt from a trip to Dart Heating & Air Conditioning victory lane. Oosterholt, Kent Missons, Josh Bullen and Ken Townsend followed the leader to the stripe.

Missons and Oosterholt each scored a pair of Mini Stock heat races.

The Outlaw Midgets rolled to the line 16 teams strong for a 25 lap ‘A’ main that had Zack Millman and Kevin Spiesz on the front row. At the drop of 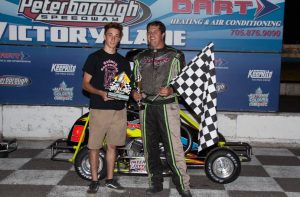 the green flag, Nigel Buttivant moved into the lead, with his teammate Jessica James taking 2nd with 3 laps on the scoreboard. The team cars swapped position; just before Jody Bound took second on lap 5 and wrestled the lead away from James a lap later. Drivers were working through lapped traffic all the way around Canada’s Toughest 3rd of a Mile Paved Oval but Bound was the best of the bunch. James held on for the runner-up spot over Rob McCall, Buttivant and Wally Wilson. The full race story can be found at www.outlawmidgets.ca. 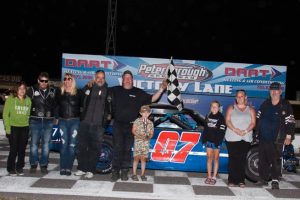 With 50 laps on the agenda, Mark Gordon and Tim Burke brought the Super Stock field to the line for the final feature race of the night. Gordon jumped-out to an early lead, with Tyler Bouillon slipping into 2nd while Burke looked for a spot on the inside line. Rob Richards turned his turn in the top spot, with 7 complete but the race’s first yellow flew just a couple of laps later. Richards and Dan Archibald fought over the lead through a number of yellow flags until Archibald took the spot with 31 laps complete. With time constraints caused by the 11:00 curfew an issue, the race was shortened and Archibald declared the winner as the caution flew at lap 35. Mark Gordon, Richards, Paul Boundy and Miles Tyson rounded-out the top 5.

All main event finishes are unofficial and subject to scoring review as well as post race technical and safety inspection.

Bullring bullet points: On a night where adult spectator grandstand admission was just $2.00, Carl Kellar of Campbellford collected nearly $1450.00 as the winner of the Millbrook Lions Club 50/50 draw…Ryan Babin – a former Mini Stock track champion – returned to action at the controls of Rob Crick’s #11 Bone Stock. Kyle Donaldson subbed for Howie Crowe in the #28 Super Stock, while Chris Mitchell steered another piece from the Crowe Boyz stable. James Campbell was on hand in the #17 Mini Stock, while Nick Markwell wheeled the #70 machine.

One of the summer’s biggest events takes centre stage Saturday, July 14th as the Canadian Legends Asphalt Nationals finale invades Peterborough Speedway. The 35 Legends feature will be part of a show that also includes the home track Battlefield Equipment Rental Bone Stock, Jiffy Lube Mini Stock and Late Model teams; with timed spectator laps for King of the Hill. Pit gates open at 2:30, with spectator grandstands unlocked at 5:00 and racing at 6:00.

Get the latest track news and schedule updated 24/7 by visiting www.peterboroughspeedway.com or checking the track’s Facebook or Twitter social media platforms.