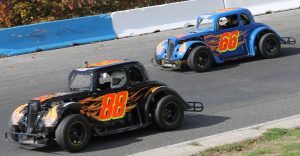 The teams, the talent and the experience. With main event winners and former champions including Foisy, Ledson, Cuthbertson and Haufe showing up and comers, as well as fresh faces the fast way around, the inaugural event for the re-branded Eastern Ontario Legends Series – presented by Trailers Plus – is set for the green flag – Saturday, May 20th – at Canada’s Toughest 3rd of a Mile Paved Oval. Speaking for the tour’s board of directors – that also includes Jeff Drimmie, Geordie Ledson and Kevin Foisy – Andrew McFadden says every driver in the field is ready to get things underway.

“Legends racing has been a part of Peterborough Speedway’s history for a number of years and to kick-off this latest incarnation during the 50th Anniversary Season is very big,” McFadden said. “7 of this year’s 16 events will be run on the regular schedule at the tight, tricky Central Ontario layout; and we’ll be back for the season-ending Autumn Colours Classic again this year.”

The first calendar of action under the Eastern Ontario Legends Series banner offers plenty of excitement for fans of the speedy, scaled-down machines. In addition to the Peterborough dates, there will also be a pair of Friday night shows – in support of OSCAAR divisions – at Kawartha Downs and Speedway. The tour has 4 events at Sunset Speedway and a solo round at Grand Bend. McFadden points out that teams will also get the chance to showcase their efforts on a much bigger stage.

“We’ve arranged to have a pair of National Qualifiers on the schedule,” McFadden said. “Winning the July 8th main event at Peterborough or the August 5th show at Sunset will earn the victor a preferred starting spot for the finale at the Las Vegas Motor Speedway Bull Ring; October 12th to 15th.”

Mark the date on your calendar. The first 2017 race for the Trailers Plus Eastern Ontario Legends Series, part of the 50th Anniversary Season opener – Saturday, May 20th – at Peterborough Speedway.