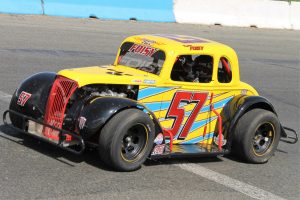 The 2017 regular season for the Trailers Plus Eastern Ontario Legends Series is about to see its checkered flag as the popular travelling tour heads for the 25th Anniversary edition of the Autumn Colours Classic – October 6th through 8th – to crown its annual champion at Peterborough Speedway.

Its been a great year for EOLS drivers and teams. And the excitement continued Saturday, September 23rd at Sunset Speedway, as Kevin Foisy picked-up the main event victory, with Miles Tyson and Matt Haufe following the driver of the #57 machine across the line. Jeff Drimmie – who along with Foisy, Andrew McFadden and Geordie Ledson make up the Eastern Ontario Legends team officials – says everyone will be doing their homework in a quest to add an Autumn Colours Classic win to their resume.

“Even with the level of success we’ve already achieved, this could be our biggest event of the year,” Drimmie said. “One driver will be named the Autumn Colours Classic champion, while others throughout the field will have the chance to improve their position in the final 2017-point standings. It’s a win-win situation for everyone in the Trailers Plus Eastern Ontario Legends Series.”

Matt Haufe, who started the year with an impressive 8 race win streak, currently leads the point standings and the Stittsville, Ontario Speedster looks to have a lock on the series championship. In his rear-view mirror, there is an intense battle for position being waged between Adam Cuthbertson, Jamie Riberdy, Wes Cuthbertson, Cole McFadden and Terry McClelland who are battling it out for the next 5 spots in the running order.

Haufe readily admits that he’d like to add a second-straight Autumn Colours Classic championship to his resume, but a quick check of the standings heading into the province’s premiere auto racing event shows that 45 different Eastern Ontario Legends Series drivers have scored points in at least one feature event this year. The 26 ‘A’ main starters will be chasing a share of a $10,000 race purse. Grand Bend feature winner and Michigan standout Greg Rudzik and 2012 Autumn Colours Thunder Car Champion Smokin’ Joe Adams have also confirmed plans to run with the EOLS teams.