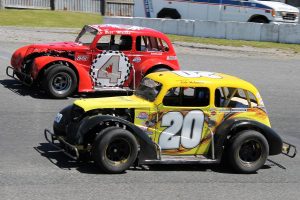 Since kicking-off its inaugural schedule at Peterborough Speedway’s season opener, the Trailers Plus Eastern Ontario Legends Series has turned heads, creating a stir in the provincial motorsports community. With strong car counts and incredible action from green flag to checkered, the upstart tour is cranking-out the hits. Matt Haufe has been the only main event winner to this point in the season, but series spokesperson Jeff Drimmie says that’s only part of the story.

“We give our teams 25 laps to settle the score in every feature race and there has been some great racing at every show,” said Drimmie, who along with Andrew McFadden, Geordie Ledson and Kevin Foisy make-up the team of EOLS officials. “With the right breaks and a little bit of luck, there isn’t a driver in the field who can’t make it to the winner’s circle no matter where we run.”

A quick glance at the current Trailers Plus Eastern Ontario Legends Series point standings reveals exactly how talent-laden the group’s driver roster actually is. Haufe’s early success has given him a cushion of exactly 50 points over his nearest rival, but there is a gap of about 80 markers standing between 2nd and 8th positions. One race could make all the difference in the point chase.

The Eastern Ontario Legends Series will be back at Peterborough Speedway Saturday, June 24th as part of the track’s annual Autism Awareness Night. Pit gates will open at 3:00, with the spectator grandstands unlocked at 5:00 and the first green flag at 6:00.