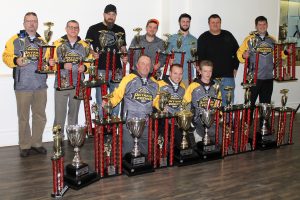 The Canadian Canoe Museum in Peterborough, Ontario provided the backdrop – Friday, November 10th – as drivers and teams with the Trailers Plus Eastern Ontario Legends Series celebrated its 2017 season.

Following a roast beef dinner with all the trimmings, awards for the recently completed schedule – the inaugural campaign under the rebranded EOLS banner – tour officials handed-out awards to drivers and recognition to invited guests for participation throughout the year. First on the agenda were the Most Improved and Most Sportsmanlike Driver honours, presented to Rick Eades and Don Arnott, respectively.

The father and son tour management team of Dale and Kyle Power was acknowledged for their dedication to the series, while Andrew Massey received the dubious honour of accepting the year’s Hard Luck Award. A special presentation was also made to “Waving Willy”, Bill Mason who announced that – after 14 years of action – the 2017 season would be his final season. Officials announced that – moving forward – in recognition of Mason’s commitment, the Rookie of the Year Award would be renamed in his honour. The first-ever recipient was Dawson Drimmie. The Best Appearing Car prize went to the #6J of Jamie Riberdy. The Owner’s Achievement Award was presented to Jeff Drimmie, on behalf of the #88, #66 and #44 teams.