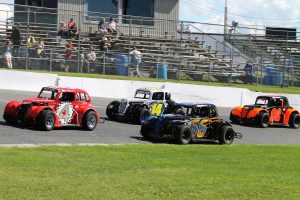 It promises to be the biggest event in the history of the Trailers Plus Eastern Ontario Legends Series. Saturday, July 8th, at Canada’s Toughest 3rd of a Mile Paved Oval, the popular tour will award a trio of guaranteed starting spots for the US Legends Asphalt Nationals – October 13th and 14th – at the Las Vegas Motor Speedway Bullring.

“This will be the first time that Peterborough Speedway has hosted a National Qualifier,” said Jeff Drimmie, who along with Andrew McFadden, Geordie Ledson and Kevin Foisy make-up the team of EOLS officials. “The top finishers in the Pro, Semi-Pro and Masters divisions will each advance to the big show. Teams will be running a 30-lap main event, with increased prize money throughout the field.”

With Matt Haufe already owning a fist full of feature event wins on this year’s tour, he’ll definitely be one of the cars to beat, but Drimmie says he expects every driver in the starting line-up to bring their best run to the table with so much on the line. Series officials have also arranged to have an open test session for Legends drivers – Friday, July 7th, from 4:00 ‘til 7:00 – at Peterborough Speedway. Teams can test (one car on the track at a time) for just $10.00.

On raceday – Saturday, July 8th – pit gates will open at 2:00, with the spectator areas unlocked at 4:00 and the night’s first green flag at 5:00. Because its also Fan Appreciation Night, general admission grandstand tickets are just $2.00.