With only a handful of events remaining in the regular season, teams from the home track Mini Stock, Renegade Truck, Super Stock and Late Model divisions were joined by the Trailers Plus Canadian Legend Car Series – Saturday, August 6th, with sponsorship from Babin’s Automotive Repair, servicing all makes and models – for a chance to add championship points toward their quest for the 2022 Peterborough Speedway titles. 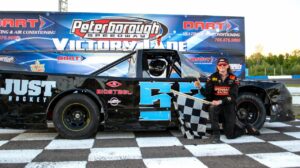 The first of night’s main events to hit the track was a 20 lapper for the Trent Lakes Complete Plumbing Renegade Trucks, as Terry Hubbert and Bill O’Hara brought the starting the field to the line. Paul Boundy wheeled his way into an early, with O’Hara holding-down the runner-up position. An early race caution flag slowed the pace, with Kyle Gordon moving into 3rd, then taking 2ndspot with just 7 laps on the board. With Boundy still leading, Gordon was looking for the position and took the top spot with 11 laps complete and scored the eventual win. Boundy held on for 2nd, with Stacy Switzer, O’Hara and Hubbert completing the top-5.

Bobby Cousineau and James Townsend were on the front row as the Late Models took the Great Canadian RV green flag for their feature tilt. Using his inside line

starting spot, Cousineau claimed the early lead with Dan McHattie and Jacob Mercer moving their rides into contention. The yellow flag flew with 7 laps on the scoreboard and Cousineau holding the lead on the restart. Mercer took the runner-up spot with a dozen laps complete, but everyone in the field was looking for a spot. Cousineau held-off his challengers for his first career win, over McHattie, Townsend, Mercer and Steve Powell. 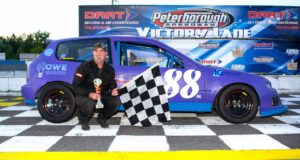 Chris Tubman and reigning track champion Jeremy Kelly paced the Jiffy Lube Mini Stock field to the line. The pair ran nearly identical laps through the opening stages, with Kent Missons, Ember Junkin and Brock Baker locked in a torrid 3-car battle for 3rd place in the running order. As the laps clicked away, the first 4 cars in the line-up were running about a car length apart, with Tubman continuing to show the fast way around. The 20-lap race distance seemed to roll by in the blink of an eye as Tubman took his 2nd win of the season in the caution-free feature. Kelly, Tyler Junkin, Shawn Solomon and Ember Junkin completed the top 5.

The 20 lap KOD Disposal Super Stock pack rolled from the staging area with Marlie Owen and current point leader Bailey Jacobs on the front row. Even without the 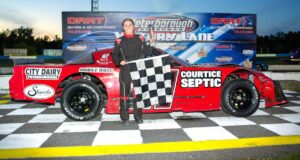 humidity, the Super Stock field has delivered some of the hottest action of the year. Owen took the lead, bringing Jacobs along with her. The long-time track favourite led through the early stages and was still in control at the caution flag that flew at the halfway mark. Jacobs continued to look for a way around the No. 21 car, but Marlie Owen was equal to every challenge on the way to her 2nd win of 2022. Paul Boundy, Mark Gordon and Jeremy Dobb chased the lead duo across the stripe. 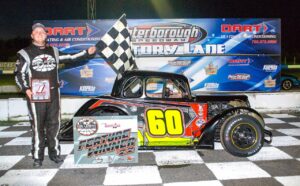 Feature race action for the night wrapped-up with the Trailers Plus Canadian Legend Car Series that saw Wes Cuthbertson and Glenn Morris lead the field to the green flag. Cuthbertson took the lead early and had a strong piece throughout the race distance. Dawson Drimmie moved into the runner-up position, with Matt Haufe hot on his tail. Slower traffic came into play around lap 8, with the race’s first caution flag for an issue on the front stretch with 10 laps on the scoreboard. Adam Cuthbertson moved into a spot to challenge his brother for the lead, but the race pace was slower again for debris on the backstretch. A number of different drivers scored at least one lap at the front, but Parker Traves made the pass that mattered with a pass for the top spot with only 3 laps remaining. The No. 60 machine took his 5th win of the year, ahead of Wes Cuthbertson, Haufe, Adam Cuthbertson and Drimmie.

All finishing positions are unofficial and subject to scoring review as well as post-race technical and safety inspection.

Bullring bullet points: With temperatures in the 30 degree range and humidity levels forcing things even higher, the Hot August Nights Racing Series lived-up to its advanced billing…Kathy McCabe of Lindsay, Ontario pocketed the night’s 50/50 draw cash of $411.00…Home track Mini Stock racer Victor Vowles recorded a fast time during King of the Hill, wheeling his 2010 Hyundai Genesis…Former track regular Kent Missons took a turn at the wheel of the No. 84 Mini Stock, filling-in for Rob Crick…Ryan Babin returned to the Mini Stock ranks in a race-winning ride acquired from Nolan Gould. His night was cut short when the rebranded No. 89x machine retired before the end of the feature event.

The year’s final Double Toonie/Fan Appreciation Night – presented by Pepsi – is next on the 2022 schedule at Peterborough Speedway. On track action includes the home track Bone Stock, Mini Stock, Renegade Truck, Late Model and Junior Late Model divisions, plus the Ontario Modifieds Racing Series. General admission passes are $ 4.00, with a Fan Appreciation autograph session at intermission. Pit gates for the Saturday, August 13th show open at 1:30, with the spectator grandstands unlocked at 4:00. Racing starts at 5:00.

Details on the final regular season events at Canada’s Toughest 3rd Mile Oval and the 29th running of the Autumn Colours Classic can be found at www.peterboroughspeedway.com and on the track’s Facebook, Twitter or Instagram social media platforms.