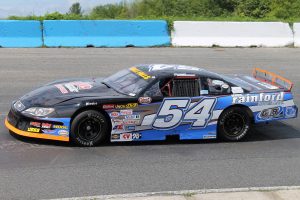 Its been a couple of years since he’s been in the starting line-up, but the 25th Annual edition of Peterborough Speedway’s Autumn Colours Classic will mark a new beginning for Danny Benedict. For the first time since 2015; where he finished 3rd in his Mini Stock, the speedster from Orono, Ontario will be back at the season-ending spectacular. He’ll make his Late Model debut at the province’s premier auto racing event – October 6th through 8th – at Canada’s Toughest 3rd of a Mile Paved Oval.

Strong runs during his Mini Stock career – including wins in the final regular season events at Kawartha Speedway and the Canadian Tire Motorsport Park Oval – earned the Algonquin College graduate the nickname ‘The Showstopper’. In the last 2 seasons, Danny Benedict has been a regular in the NASCAR Whelen Racing Series Late Model division at Sunset Speedway, where he finished tied for 10th place in the 2016 standings and was just outside the top 15 during the recently concluded 2017 campaign. Benedict says he’s looking forward to making his first ACC start in the Late Model division.

“We had a great season with the new car and I can’t wait to get back to Peterborough for ‘Colours’,” the driver, who recently celebrated his 21st birthday said. “I had a decent run going during the Chase show on Canada Day weekend, but got caught-up in someone else’s mess. That still gave the team a chance to make some excellent notes on how the car was handling and I think we’ll go into the weekend with a strong set-up.”

The new car Danny Benedict is talking about is a Shaw Chassis that the crew unveiled at Sunset Speedway’s season-opener. With a winning pedigree, the driver of the #54 machine knows he has the equipment to be competitive and run with some of the best cars in the field. A fact that was proven – Sunday, September 24th – when the youngster scored an impressive win in the 75 lap Late Model feature at Sunset Speedway’s Velocity 250 weekend. Heading into Autumn Colours – with another 75 lapper on the agenda – the victory was a real shot in the arm.

“Our team has received help from so many people throughout the season, it would be impossible to name them all,” Benedict said. “Being able to win at an event as prestigious as Velocity shows the importance and value of hard work. This sport is all about attitude and everyone on the crew has a high level of confidence as we head to Peterborough on Thanksgiving weekend. We’re always ready to go when we get to the track, but now there will be an extra boost all around.”